Finales And Farewells: Say Good-Bye To These Five Shows In '15 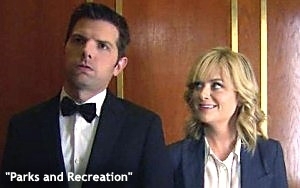 The New Year is shaping up as a year of farewells. Whether you choose to become emotional about these good-byes is up to you.

Will you miss “Two and a Half Men” when it’s gone? What about “The Mentalist”?

“Mad Men” is saying good-bye too. You can be forgiven for thinking it already had, but no -- seven episodes remain.

Here are five of the most noteworthy series that will have their final runs this year.

“The Mentalist” (CBS): The seventh and final season of this one-hour drama about a tousle-haired ex-“psychic” who aids the California Bureau of Investigation in solving high-profile murders began Nov. 30. It continues here in the New Year on Wednesday nights (at 8 Eastern), starting this week. CBS is giving the show 13 episodes to wind things up. For series star Simon Baker, the end of “The Mentalist” caps a continuous run on CBS that began in 2001 with “The Guardian” (2001-2004), continued with the short-lived “Smith” (2006-2007) and now ends, seemingly, with “The Mentalist.” Maybe they’ll find him a new series between now and the May fall-schedule announcements.

“Parks and Recreation” (NBC): NBC is shooing “Parks and Recreation” out the door in a quick six weeks that the network is positioning as “the first TV event of the new year … a sendoff that will maximize the show’s cultural impact.” Well, if you’re like me, the “cultural impact” of “Parks and Rec” may have eluded you. Maybe, like me, you were too busy enjoying this show to consider its “impact.” The sendoff NBC has devised to maximize this impact consists of back-to-back, half-hour episodes airing Tuesday nights starting on Jan. 13 at 8 Eastern, and ending with a one-hour finish on Feb. 24 -- a total of 13 episodes. Impact or no impact, I will miss this show.

“Justified” (FX): I will miss this show even more. The sixth and final season of this series about a laconic U.S. marshall working to tamp down the criminal population of Appalachia (specifically, a county in Kentucky) starts Jan. 20. “Justified” is the second of two signature FX series to say good-bye this season. The other was “Sons of Anarchy,” which ended last month. For me, they defined FX -- vexing, violent, original. What ever will I do without them?

“Two and a Half Men” (CBS): It’s 11½  seasons and out for “Two and a Half Men” -- which doesn’t even have one of its original “men” (Charlie Sheen) nor its “half man” (Angus T. Jones). He outgrew the show, complained about it publicly, and was replaced by a young woman character named Jenny (Amber Tamblyn). Ashton Kutcher replaced Sheen in 2011 -- a sudden windfall for Kutcher that made him one of the highest-paid actors in all of television. His huge paydays come to an end Feb. 19 with a one-hour series finale.

“Mad Men” (AMC): “Mad Men” drifts into history with seven final episodes that will air on AMC some time this spring. It’s the second half of a bizarre plan that called for splitting the show’s seventh and final season in half -- showing the first seven of 14 episodes last spring, and then presenting the final seven later this year, about a year later. The result has been that this show that was once heralded as the finest TV series of its era has fallen off a pop-culture cliff to the point where it is now nearly forgotten. In case you forgot, last year’s seven episodes ended in July 1969, with the landing of Apollo 11 astronauts on the moon. Whether the remaining seven episodes will bring “Mad Men” out of the 1960s and into the ’70s remains to be seen. The real question is: At this point, does anybody still care?

tv
2 comments about "Finales And Farewells: Say Good-Bye To These Five Shows In '15 ".
Check to receive email when comments are posted.
Read more comments >
Next story loading