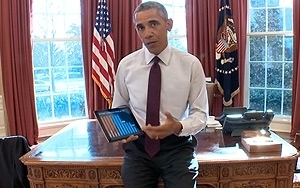 President Obama today called for an end to state laws that prevent municipalities from building their own broadband networks.

“High speed broadband is not a luxury, it's a necessity,” Obama said in a speech delivered in Cedar Falls, Iowa, a city that operates its own Gigabit fiber-optic network. “In some states, it is virtually impossible to create a community network like the one you have here in Cedar Falls. Today I'm saying, we're going to change that.”

Obama's speech comes one day after the White House issued a report touting the benefits of municipal broadband networks, which often have resulted in faster and cheaper services for residents. The administration also sent a letter to the Federal Communications Commission, urging it to nix laws that hinder towns from creating high-speed Internet networks.

“This isn't just about making it easier to stream Netflix, or scroll through your Facebook news feed,” Obama said today. “This is about helping local businesses grow and prosper and compete in a global economy,” he added.

The report issued on Tuesday, “Community-Based Broadband Solutions,” says that municipal broadband is “often a logical choice for towns and cities that are already served by a municipal electric utility, since infrastructure costs can be shared across those two services.”

Two cities in those states that now impose curbs on muni-broadband — Wilson, N.C. and Chattanooga, Tenn. — recently petitioned the FCC to invalidate the restrictions. Wilson and Chattanooga both built their own fiber-optic networks, which offered far faster service than what was available from the incumbents. Chattanooga's network offers speeds of 1 Gbps, making it one of the fastest in the country. But laws in both states are currently hindering other cities from doing the same.

FCC Chairman Tom Wheeler, who is critical of restrictions on muni-broadband, has signaled that he wants to invalidate those laws. “I believe that it is in the best interests of consumers and competition that the FCC exercises its power to preempt state laws that ban or restrict competition from community broadband,” he wrote last year in a blog post. “Given the opportunity, we will do so.”

Numerous consumer advocacy groups have urged the FCC to preempt state regulations that limit broadband networks. But some states rights' groups argue that the FCC lacks authority to invalidate local laws. At least one organization, the National Conference of State Legislatures, has threatened to sue to preserve state restrictions on broadband.