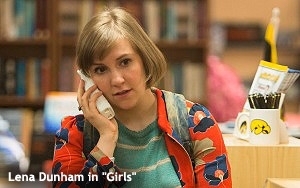 This Sunday on “Girls,” Hannah moves to Iowa, which leaves her New York friends and family members as mere bit players who are seen only briefly talking to her via phone or webcam.

Now more than ever, the show is focused squarely on Hannah because even though the show is called “Girls” -- plural -- it’s really about “girl” -- singular. That “girl” is Hannah (technically not a “girl,” but a young woman age 25), played by the wunderkind creator, executive producer, writer and (sometimes) director of the show, Lena Dunham, 28. This season, Hannah, an aspiring writer, has moved to Iowa to participate in a writers’ workshop there.

“Girls” started its fourth season last Sunday on HBO, which loves this show so much that it has already said yes to a fifth season. HBO would be crazy not to stick with it. Whether or not some TV columnist in his 50s relates to it or not, “Girls” has struck a chord in the places where it matters -- among young women, certainly; on social media, where it is much-discussed (by young women); and in all other media such as Web sites, magazines and newspapers that want to reach young women. So with that prospective target group in mind, Web sites, magazines and newspapers give “Girls” all kinds of free publicity.

I am not in this show’s target audience at all, but I don’t feel like an alien when I watch it. In fact, some of what the show depicts about the uncertainties of young-adult life feels familiar. Two years ago, I interviewed Lena Dunham at the offices of HBO in New York and I asked her what she thought a man like me should get out of “Girls.”

“I like to believe there are two angles,” she answered. “Some people who are not 24 come at the show from the angle of trying to understand how the younger generation lives. Hopefully, it’s helpful in that respect.

It was a thoughtful answer, and I liked her very much. She was a good interview.

Meanwhile, one of the first scenes in last Sunday’s season premiere had one of Hannah’s friends, Marnie (Allison Williams), pants-less in her kitchen with a man who had his face buried between her buttocks. (It’s a sex act, apparently.)

And all I could think was: Hey, this actress is Brian Williams’ daughter -- I wonder what he thinks of this!

In a way, that scene represents the disconnect between me -- a man of a certain age -- and this show. “Girls” is evidently a comedy. But it’s not the kind of comedy where you actually laugh (at least I don’t). It is “slice of life” stuff. And I suppose that some of the situations in which Hannah and her friends find themselves can be thought of as absurd enough to qualify as funny to some.

The Marnie sex scene may have been one of these instances, but I’m not sure about that.

My problem is that where TV comedy is concerned, I remain stuck in an earlier era -- of only a decade or two ago -- in which the point of making a comedy series for TV was about getting laughs. “Seinfeld,” “Frasier,” “Everybody Loves Raymond” and “The King of Queens” come to mind.

A show such as “Seinfeld,” for instance, with its famous ambition to be “a show about nothing,” was the opposite of “Girls,” which seems to aspire to be a show about something (not that there’s anything wrong with that). On “Seinfeld” (and shows like it), there was never any doubt that you were watching a show in which the generation of laughter was the highest priority. Thus, you had scenes where, for no particular reason, Michael Richards, as Kramer, would suddenly pratfall backwards over a couch.

It’s doubtful that Lena Dunham will go head-over-heels over a couch anytime soon on “Girls” -- but it would be refreshing if she did.