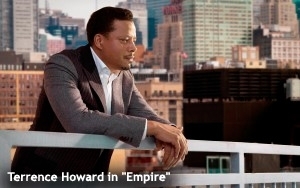 Here’s what a TV show has to do these days to draw attention to itself: Insult people.

This is the strategy that Fox’s new drama of the hip-hop music industry, “Empire,” seems to have adopted. Either because of -- or despite -- this strategy, “Empire” is a hit.

After two episodes, the show has achieved something rare for new network TV shows, particularly on Fox: It grew its ratings from Week One to Week Two. Last Wednesday, on Jan. 7, the premiere of “Empire” drew 9.897 million total viewers from 9 to 10 p.m. Eastern. It scored a 3.8 in the demo (18-49) -- ranking No. 5 of all network shows last week in this most-coveted of age groups.

In Week Two, this past Wednesday night, 10.289 million watched “Empire,” according to the Nielsen overnights. For this week’s episode, the demo rating was a 4.0. From a ratings standpoint, the show is a victory for Fox, which has sorely needed one.

“Empire” is about a fictional -- and very successful -- hip-hop music company run by a man named Lucious Lyon, played by Terrence Howard. He has three sons -- one a rapper, another an R&B singer (who also happens to be gay), and the other a hard-nosed businessman. All three are vying for eventual control of the company.

Lucious has an estranged wife named Cookie (played by Taraji P. Henson, who is rightfully garnering praise for her performance) who has recently been sprung from jail and is now back up in her ex-husband’s business demanding her fair share. That’s because the company was apparently seeded years before by $400,000 she earned -- along with her husband -- by dealing drugs.

So the dramatic, underlying tension in the show stems from an ongoing conflict between the company’s present-day legitimacy (it’s trying to go public) and its unsavory roots in street-gang culture. In fact, as if to drive this point home, background music that was eerily similar to the “Godfather” soundtrack was heard briefly in this week’s episode.

Also on this week’s episode, more than in the premiere a week earlier, a debate over the “values” of hip-hop burst out into the open. In the episode, rap artists (including Lucious’ son, Hakeem) were seen making outlandish statements and engaging in anti-social behavior to draw attention to themselves.

For Hakeem, this meant urinating on the carpet (complete with urination sound effects) of a posh, crowded bar while disgusted bar patrons watched and a member of his retinue recorded the whole ugly scene on a cell phone for dissemination later on social-media and, consequently, news media.

When it became plain that the other bar patrons didn’t appreciate having a man suddenly urinate right in front of them, Hakeem complained that they were all racists. “Y’all got a problem with some black boys in yo’ fine establishment?” Hakeem asked them. “I got enough money to buy this bitch and everybody in it!” he declared.

“Check this out,” he continued unpleasantly, “all you white people that voted for the first black president to make you feel good about not being racists, the joke’s on y’all because ’cause Barack Obama ain’t nothin’ but a sellout!”

Then, when police sirens were heard approaching, Hakeem made a statement that acknowledged last year’s headline-making riots, demonstrations and racial strife over the fatal shooting by police of Michael Brown in Missouri and the choking death of Eric Garner in New York City, also by police. “Oh, so da po-po comin’ to shoot me now?” he said with a laugh.

Ticket sales to an upcoming Hakeem concert then quadrupled. And Papa Lucious went on a cable-news show to apologize for his son’s behavior and try and explain it. “Our music is … a narration of an oppressed people,” Lucious said.

“How does [the music] give [young people] hope if all the songs do is promote more violence?” asked the fictional talk-show host (a white woman).

Elsewhere in the episode, an apparently Jewish female publicist was stuffing her face with a bagel and complaining that the deli where she obtained it forgot to give her the cream cheese with capers. So she threw it, cream cheese side down, on the floor. So for some reason, Jews also took it on the chin in this week’s “Empire.”

When this week’s episode of “Empire” was over, it dawned on me that I’ve grown tired of TV and movies glorifying the thug life as the road to riches, and more to the point, happiness (although none of the characters in “Empire” strike me as particularly happy).

I also felt that the show was demeaning to African-Americans, whose contributions to American art and culture -- particularly when it comes to music -- are incalculable.

And yet, this show is a huge success. So what do I know?