Meredith To Raise Allrecipes Rate Base To 1.1M 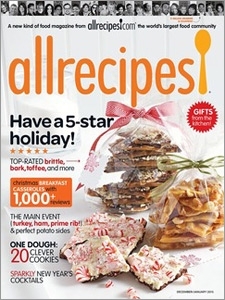 Some magazines seem to be immune to the overall downward trend in print circulation and advertising, and that’s especially true for titles with origins in other media, like television or online. Meredith Corp. revealed plans to raise the rate base for Allrecipes magazine once again, with a 22% jump from 900,000 to 1.1 million, planned for its February-March issue.

The magazine is the print incarnation of the popular Web site, which Meredith says is the world’s largest online food destination, with over 1 billion visits annually. The publisher has also developed branded video content based on Allrecipes, which airs on “The Better Show,” Meredith Video Studios’ lifestyle program.

In November, Meredith revealed plans for a licensed product line under the Allrecipes brand, created in collaboration with the Clipper Corporation, he first licensing deal for a consumer product line bearing the Allrecipes brand. The seven-year licensing agreement calls for Clipper to create a range of cookware, bakeware and various kitchen gadgets to be sold in retail and online.

In December, 2014 Meredith launched another new magazine, Eat This, Not That!, in partnership with Galvanized. The quarterly title, which hits newsstands December 2, is the first standalone magazine produced under the Eat This, Not That! brand, originally created by Galvanized CEO David Zinczenko.