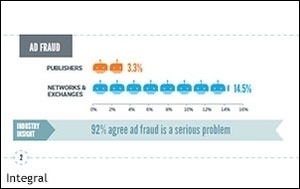 In Q4 2014, viewability rates for display ads bought and sold on networks and exchanges increased slightly to 42.6%, up from 36.7% a quarter before.

It’s better than going backward, but nobody is asserting “mission accomplished.”

An ad is deemed viewable, per the Media Rating Council (MRC), if 50% of its pixels are in-view for at least one second, or two seconds for video ads.

Viewability rates for video fared no better, checking in at 39% last quarter. That’s up 30% from the previous quarter.

In Q3, Integral noted that 18.7% of all video ads were “moderate to very high risk” for brands. That number grew to 20.7% in Q4, which Integral theorizes was due to increased supply of lower-quality inventory made to take advantage of an increase in demand. On networks and exchanges alone, nearly one-third (32%) of video ads were deemed moderate to very high risk last quarter, per the report.

We already knew that marketers were looking to turn a new page in 2015, so it’s no surprise to see the year end 2014 numbers underwhelm. Marketers are at least aware of the problem, naming viewability and ad fraud their top two concerns in 2015.

“It's become increasingly apparent to the industry that various elements impact media quality,” stated Scott Knoll, CEO of Integral Ad Science. “There is heightened awareness and demand for ads to meet or exceed quality standards.”

Integral found that 57% of the industry transacted based on viewability in 2014, with 73% planning to do so in 2015. In theory, that should make viewability rates rise. In reality? We’ll just have to see.

1 comment about "Viewability On Networks, Exchanges Sees Marginal Uptick, Still Under 50%".
Check to receive email when comments are posted.
Next story loading