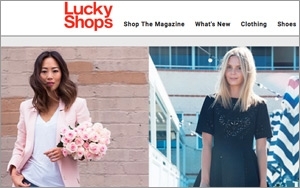 The only question is why it took so long. Shopping magazine Lucky is plunging into the ecommerce arena with the launch of LuckyShops.com, combining the magazine’s print and digital editorial content with an online retail engine that automatically renders this content shoppable.

The new ecommerce site features an editorial feed of news stories, designer profiles and essays and integrates ecommerce with apparel, shows, accessories and jewelry from designers such as Kenzo, Marc Jacobs, Eddie Borgo, Public School, The Row,and Opening Ceremony, all picked by Lucky editor-in-chief Eva Chen and her team.

Lucky Group president Gillian Gorman Round stated: “Many women will come to LuckyShops.com simply to consume content, but they will also have the ability and the option to complete their shopping journey by making a purchase.”

On the experiential marketing side, Lucky launched a weekend shopping event, also called Lucky Shops, back in 2004. However, ecommerce has loomed larger in the magazine’s business strategy in recent years.

Lucky was spun off by high-end publisher Conde Nast last August, in a deal which saw it join forces with ecommerce platform BeachMint in a joint editorial and e-commerce venture. The new combined entity received complete control of all Lucky’s editorial content, including print and digital channels, in order to create a combined editorial and online shopping destination for brand-conscious consumers.

Last week, Lucky laid off at least 10 staffers, including its executive fashion director Alexis Bryan Morgan. It’s unclear whether the layoffs were related to the launch of the new ecommerce site.