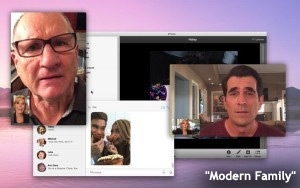 The makers of next week’s all-digital episode of “Modern Family” should be proud of what they have achieved.

They took an idea that might have opened up the show to criticism and turned it into a superlative episode that breaks new ground in sitcom storytelling.

If it hadn’t worked, the criticism would have been that “Modern Family” had agreed much too readily to undertake a stunt that would amount to little more than crass gimmickry. Instead, the show’s producers, writers and cast made an episode that remains true to this acclaimed series’ mission to portray a typical, extended contemporary American family both accurately and satirically.

As reported yesterday by our P.J. Bednarski, the “Modern Family” episode airing next Wednesday night (Feb. 25) on ABC tells its story entirely from the perspective of one character’s computer screen and the character’s interactions with family members via smartphones, tablets and social media Web sites.

The computer screen is the MacBook belonging to Claire Dunphy (Julie Bowen) who is seen killing time in Chicago’s O’Hare Airport before her flight by checking in with her husband, Phil (Ty Burrell).

Every image in the show emanates from Claire’s computer screen as she exhibits behaviors that will be all-too familiar to everyone who watches this. Among other things, in the midst of face-timing family members, she distractedly wanders the Internet to glance at various Web sites, including one that advises visitors on how to better organize their closets.

The real achievement here is that the episode’s multifaceted, complex storyline remains completely intact and easy to follow while never once wandering away from Claire’s computer screen. For example, there are no extraneous “establishing” shots, as there would be normally on this show, of house exteriors or even the airport in which Claire is situated (although you certainly know it’s an airport from her surroundings).

The episode -- which I got to watch this morning, courtesy of ABC -- is far from a love letter to all things digital. On the one hand, the digital devices used on the show are certainly portrayed as a means for this family’s disparate members to stay in touch and indeed rally to each other’s aid in the face of an unfolding situation that seems like a family crisis.

On the other hand, though, the technology that everyone on the show has so readily adopted leads not only to a feeling of family closeness, but it also causes and exacerbates the very confusion that underlies the central misunderstanding in the episode.

This all-digital “gimmick” also manages to remain true to two other elements that make “Modern Family” the best current comedy on TV: The episode is both funny and affectionate.

While the devices shown in the episode allow family members to remain in touch and connected with each other, the devices are also portrayed as the means for subterfuge, particularly when we see the ways in which Claire “spies” on her eldest daughter, Haley (Sarah Hyland). Her tactics include making up a fake Facebook page with the identity of a boy named Brody Kendall who she hopes Haley will “friend” so that Claire can better keep track of her since Haley has “unfriended” her, her own mother.

The bottom line is that the “gimmick” works. When we look back in May to the 2014-15 TV season, this episode will be one of its highlights – creative, ground-breaking, innovative, hilarious -- all things we’ve come to expect from “Modern Family.”