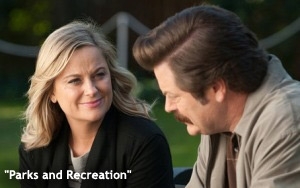 “Parks and Recreation” went out Tuesday night in the same way it came in six years ago -- with a lot of heart and low ratings.

Fans of the show had much to savor and enjoy in the show’s farewell episode -- a special one-hour episode that aired at the unusual time of 10-11 p.m. Eastern on NBC.

In the show, the stories of the various characters were projected far into the future -- as far as the year 2048. At one hour, the episode was long enough to tell the future stories of every principal character.

It bore a passing similarity to the final episode of “Six Feet Under” seen on HBO in August 2005 in which the future lives and deaths of each of the characters was revealed. However, the big difference was that “Six Feet Under” was a drama series about death and “Parks and Recreation” was a comedy series in which death was hardly a centerpiece.

As it happened, only two deaths were revealed on “Parks and Recreation” and one of them was faked as part of an insurance scam (having to do with the character of Jean-Ralphio, played by Ben Schwartz).

The other death -- a real one -- was the death of roly-poly Jerry Gergich (Jim O’Heir). But as deaths go, his was hardly tragic. It was revealed that he died peacefully at age 100 surrounded by dozens of beloved family members, including his beautiful and ageless wife played by Christie Brinkley, after serving countless terms as the most beloved mayor in the history of Pawnee.

As for plucky Lesley Knope (Amy Poehler), she was shown parlaying her stint as U.S. Secretary of the Interior into a successful run for governor of Indiana. She was seen being asked to run by a Democratic Party operative who buttonholed her at a dinner party being given by Joe Biden and wife Jill -- both of whom played themselves in the finale episode. The vice president proved once again that he has a gift for comedy.

The overnight ratings indicate that the “Parks and Rec” faithful turned out for the finale, while the rest of humanity went elsewhere during the hour. The one-hour “Parks and Recreation” final episode finished third in total viewers (4.189 million) and second in 18-49 viewers, scoring a 1.6 rating in the demo. (“Forever” on ABC scored a 1.0 demo rating.)

The total viewer tally for “Parks and Rec” represented the biggest audience for the show since January 2012, NBC noted.

The fact that “Parks and Rec” never ranked high in the Nielsens does not detract from its quality. Somehow, the show survived long enough to complete 125 episodes, assuring a future for itself in rerun syndication where many people will be very happy to discover it for the first time.