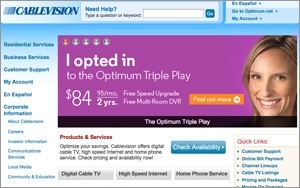 Cablevision Systems Corp. had modest growth for its fourth-quarter revenues, but continued to see erosion from its core video subscribers.

The big Long Island, NY-based cable company lost 34,000 video subscribers in the fourth-quarter of 2014 compared to the end of the third quarter, now totaling 2.68 million. Analysts were expecting to see a loss of 27,000. A year ago, Cablevision lost 18,000 during its fourth-quarter period.

Analysts say these Cablevision’s fourth-quarter results were mostly in line with expectations. Almost 90% of the company’s revenues come from its core cable business.