Nick Kicks Off Upfront Season With A Big Production Promise 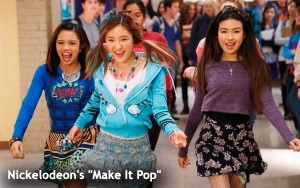 Nickelodeon promised a robust (and presumably expensive) commitment to program production in the coming year as the kids’ content empire held the first upfront presentation of 2015 Wednesday in New York.

How robust? As many as 600 new episodes of both new and returning shows, vowed Cyma Zarghami, president, Viacom Kids and Family Group, onstage in an event space that was once a vast mail-sorting facility inside a landmark, pillared post office on Eighth Avenue.

Among those 600 episodes are 80 episodes of three new live-action series introduced by Nick at the Upfront: “Make It Pop” (20 episodes), about three boarding-school girls who love Korean pop and dream of forming themselves into a K-Pop band; “Talia’s Kitchen” (40 episodes), about the adventures of a 14-year-old Latina who lives with her grandmother and works in her family’s restaurant in Miami; and “The W.I.T.s Academy” (20 episodes), a spin-off from Nick’s “Every Witch Way,” about “teenage Guardians” who oversee young witches -- and wizards -- in-training at a magic academy.

Also in the works:

“Mutt & Stuff,” a preschool series set in a school for dogs and starring Calvin Millan, who is being promoted as “The Puppy Whisperer” because he is the son of Dog Whisperer Cesar Millan. This series is from Sid and Marty Krofft, believe it or not. Yes, the brothers Krofft are still around; Sid is 85 and Marty is 77.

And “Pig Goat Banana Cricket,” an animated series featuring the four characters in the show’s title (a pig, a goat, a banana and a cricket). Judging from the brief snippet shown during the presentation, this looks like a very trippy cartoon show.

Among the Nick brands that came in for the most attention at the presentation were “SpongeBob SquarePants” and “Teenage Mutant Ninja Turtles.” Understandably, Nick execs ballyhooed both franchises, announcing that a “SpongeBob” stage musical is in development. The Upfront audience was then treated to an exuberant live performance of one of the numbers being considered for the show, which is still being “workshopped,” Nick said.

As for the “Ninja Turtles,” actor Will Arnett came onstage to remind the audience that last year’s “Teenage Mutant Ninja Turtles” movie -- in which Arnett starred -- has grossed nearly a half-billion dollars to date. A sequel is due to be released in 2016.

Nick’s presentation played out on a very wide screen that dwarfed the Nick execs who stood before it to extol “the power” of Nickelodeon’s “unmatched, 10-screen ecosystem,” a term being applied -- accurately, it would seem -- to the integration of the many platforms that concern content companies and their advertisers these days. TV is still “the anchor” of the Nick portfolio, however, emphasized Jim Perry, head of sales for the Nickelodeon Group.

Among the new initiatives touted at the Upfront: The revival of the preschool brand “Noggin,” which is being relaunched as a mobile subscription service for preschoolers March 5. The App will be commercial-free and cost $5.99 a month.

Nick also announced the formation of “Nickelodeon Inside Out Solutions,” described as a “banner” under which Nick is grouping its “roster of consumer insights, partnership marketing and multimedia services.”

Nick’s presentation closed with a live performance by the teen band EchoSmith, made up of four siblings from California -- three boys and one girl -- ranging in age from 16 to 21. They performed two songs, including their best-known song called “Cool Kids.”

They were very cool kids indeed.