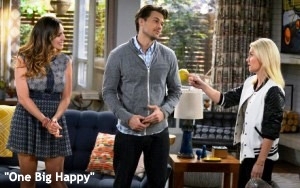 A word of caution before you read further: This blog post contains references to various bodily functions that might be offensive to some.

I wish network TV shows would come with such a warning (please don’t bring up TV’s content ratings here; everyone knows they’re a joke), but I realize such a wish is as futile as baying at the moon. I’ve tried that, and it accomplishes nothing.

I hardly know where to begin with this review of this new NBC comedy series called “One Big Happy,” premiering tonight (Tuesday, March 17) at 9:30 Eastern, so I’ll begin at the beginning.

First, here’s what it’s about: The title is adapted from the phrase “one big happy family.” It refers to the unusual structure of the “family” seen on the show.

This “structure” goes like this: A lesbian named Lizzy (Elisha Cuthbert) lives with her lifelong best friend -- a straight male named Luke (Nick Zano) -- with whom Lizzy is trying to get pregnant. It seems the two made some sort of a pact while in their 20s in which they agreed that if they both reached the age of 30 without a spouse, then they would become platonic partners in the raising of a child.

In the first two episodes of the show (which NBC provided for preview), Luke meets and suddenly falls in love with a sexy English woman named Prudence (Kelly Brook). Before you know it, Prudence is living with them too. And voila, you get “One Big Happy.” Or do you? That question forms the basis for this situation-comedy’s central “situation.”

In a cover letter that accompanied the DVD sent to TV columnists, NBC noted in the second sentence that the executive producer of this show is Ellen DeGeneres, perhaps to help explain the show’s emphasis on lesbianism. The woman who actually runs the show is named Liz Feldman. According to a story on the Hollywood Reporter Web site, the scenario on “One Big Happy” is loosely based on Liz Feldman’s own life.

In the same story, Ms. Feldman discusses the “difficulty” of getting a lesbian comedy on network TV. That surprised me because, when you stop and think about it, lesbians on TV are old hat at this point. A sitcom in which a lesbian is one of the show’s three main characters should hardly strike anyone as groundbreaking.

Far from it -- if nothing else, “One Big Happy” represents the same old dreary formulas and tasteless conversations that characterize so much of network television comedy today.

To be specific (see warning in lead paragraph, above), this show’s obsession with urination and bowel movements is simply breathtaking.

The first episode begins with the purchase of a home pregnancy test at a drugstore that leads to the actual taking of the test at home. Certainly, urine is a central ingredient in such tests, but the way in which Lizzy and Luke carry on about it (even debating and pantomiming male and female urination “styles”) had me wondering if the writers of this show weren’t overdue for a tune-up at their shrinks.

As for the other bodily function mentioned above, more than one conversation ensues about the benefits of colonics, with Lizzy mounting a sprightly defense of her “loose” bowels. Please be assured that I am not making this up.

The prevalence of this kind of comedy on TV would suggest that viewers are not altogether put off by it. For me, though, these topics and conversations have always been distracting enough to divert my attention away from a show’s otherwise strong points.

However, “One Big Happy” had no discernible strong points. It is as charmless and witless as a hundred other network sitcoms that have come and gone, and were soon forgotten.