Reality Show About Seven Dwarfs Proves Anything Is Possible On TV 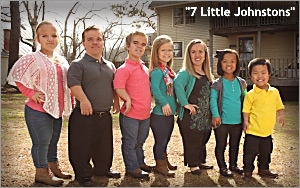 One of the things I have observed over the years about the evolution of TV content is this phenomenon: Ideas that you joke about because they seem too far-out to ever really become TV shows actually do become TV shows eventually.

For example, some years back, when a spate of little-people reality shows was then popping up on TV, I recall making remarks (tasteless ones, I admit) in conversations with co-workers, along the lines of: “At least none of these shows have seven dwarfs!” Or: “It won’t be long before someone finds a family of seven dwarfs and makes a TV show about them!” Ha ha, right?

Let me please emphasize that I don’t mean to be insensitive to little people here -- and I didn’t mean it back then either (though my off-the-cuff remarks made in an office setting years ago are regrettable to me now). It is also true that in the main, the little people seen on TV -- both then and now -- are being showcased respectfully.

The exception, at least to me, is the group of little women seen on Lifetime’s “Little Women: LA.” I wrote about this show extensively in January, so I won’t delve too deeply into it here.

Suffice it to say that the January blog asked whether this was the worst show on TV (implying that I thought it was). Soon thereafter, in another illustration (and one of many) of how the ravings of a TV columnist have no influence on the TV business, Lifetime announced it is developing a whole ’nother little-women reality show, this time based in New York City with the title "Little Women: NY."

When I wrote about the six little women in “Little Women: LA,” I did comment snidely in a parenthetical phrase that “fortunately,” the show featured six dwarfs and not seven. I guess I couldn’t resist.

Cut to this past Monday and what happens? TLC announces a new little-people series called “7 Little Johnstons,” about a family of – you guessed it -- seven dwarfs. The 10-episode show is scheduled to premiere on TLC on March 31, when it will join a program lineup that already has two shows about little-people families -- “The Little Couple” and “Our Little Family.”

Like the families featured on those shows, the Johnstons are positioned in TLC’s press release as a “typical” family who just happen to be dwarfs. If you are wondering if any of the seven have names like “Happy” and “Grumpy,” then first of all, shame on you. And second, no, they do not. That would be tasteless.

The “defense” of these shows (if they even need “defending”) is that they show people who possess physical challenges in a very positive light. Except for these challenges, these shows are saying, the Johnstons are just like you and me.

To the extent that “7 Little Johnstons” and the other TLC little-people shows might help to dispel stereotypes about little people, then I am all for them.

For example, I spotted one such persistent stereotype recently in a recurring interstitial feature seen on Turner Classic Movies about the making of “The Wizard of Oz.” In this interstitial, an interview subject was expounding on the little people -- about 125 of them -- who were hired to play Munchkins.

And this interview subject repeated the oft-told and widely accepted tales of how these dwarfs allegedly wreaked havoc at MGM with their “mischief,” which included drunkenness, the playing of childish pranks, and generally getting “underfoot” because, of course, they’re little people and this is what dwarfs do, right?

These tales have been told for so long that no one seems to ever doubt their veracity, but while watching this interstitial interview it occurred to me for the very first time that these tales are probably not true, or at the very least, greatly exaggerated. Think about it: Why is it a “given” that when 125 dwarfs get together -- the majority of them adults and show business professionals -- they would inevitably behave immaturely and act like out-of-control children? The answer is: It’s not a given, and should not be one.

How did I come by this newfound sensitivity about little people? I have to admit it’s probably because of the little-people shows on TLC. With that in mind, please join me in welcoming the “7 Little Johnstons” to TV.

tv
1 comment about "Reality Show About Seven Dwarfs Proves Anything Is Possible On TV".
Check to receive email when comments are posted.
Next story loading