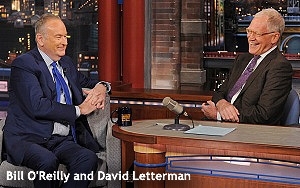 Embattled NBC News anchorman Brian Williams got some support last night from none other than Bill O'Reilly.

O'Reilly blamed an accusatory culture -- whose aim, he said, is to “destroy” famous people -- for derailing Williams. The NBC newsman was suspended for six months after it was revealed in February that he exaggerated and/or lied about his experiences covering stories ranging from the Iraq War to Hurricane Katrina in New Orleans.

“From the very beginning, I have said that we have a sport in the United States called ‘Let's destroy the famous person,’ and that’s what happened to him,” O'Reilly told David Letterman on Tuesday night's “Late Show” on CBS.

However, he then said he wasn't sure if Williams should be restored to “The NBC Nightly News,” which has been taken over, at least during the term of Williams’ suspension, by Lester Holt. O'Reilly praised Holt, and then said Williams should be brought back to the network in some other role that O'Reilly didn't, or couldn't, specify. (This portion of the conversation was edited out of the video CBS posted on YouTube -- link above.)

O'Reilly also commented on his own controversy that flared up in the wake of the Williams scandal. In February, Mother Jones magazine reported that O'Reilly had told exaggerated stories about his experiences covering the Falkland Islands War in Argentina in 1982 when he was a reporter for CBS News.

After the story was published in February, O'Reilly went on the offensive, producing evidence to back up his war-coverage claims and even gathering testimony from former CBS News colleagues who corroborated O'Reilly's claims.

On the “Letterman” show, O'Reilly triumphantly declared victory in the court of public opinion with this strategy. Among other things, he said, the already high ratings for his Fox News show, “The O'Reilly Factor,” increased by 20 percent.

“Wait a minute -- you got more viewers?” Letterman asked incredulously.

To which Letterman replied: “20 percent up … when people thought you were making stuff up …”

“But they didn’t think that,” O'Reilly said, “because I hit it immediately hard and I said, ‘Look, these are the facts. This is what happened.’

“I’ve been on the air [for 19 seasons], 15 years at No. 1,” O'Reilly said when Letterman asked him about the role trust plays in maintaining a TV news personality’s reputation.  “Our ratings now are as high as they have ever been,” O'Reilly said, “so I think they do trust me and I’m glad they do.”

O'Reilly came on the “Letterman” show to promote a TV movie, “Killing Jesus,” premiering this Sunday night on National Geographic Channel. O'Reilly is an executive producer of the movie, which was adapted from his book of the same name.