From Morbid Obesity To A Bearded Lady: The Weird World Of TLC 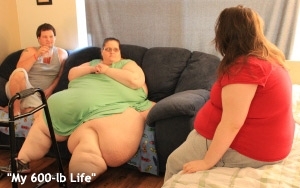 Various channels in the Discovery Networks stable have long trafficked in the travails of the morbidly obese, but this “niche” community has been getting even more exposure lately, now that the recurring series called “My 600-lb Life” has settled into a prominent time slot Wednesday nights on Discovery-owned TLC.

I first noticed these mini-documentaries about the sufferings of people whose food addictions (coupled with other psychological and physical issues) had led to extreme weight gains more than 10 years ago.

They were usually found by happenstance on the old Discovery Health channel. You would be idly grazing down the cable channels and suddenly stumble on the arresting sight of a very overweight person in the midst of surgery in which great masses of fatty tissue were being carved off of them.

The patients were both male and female, and they weighed anywhere from 600 to 1,000 lbs. The patients were shown in various phases of their lives -- at home (usually in bed) or in doctors’ offices -- as they tried to cope with their extreme obesity while preparing themselves mentally and physically for some form of surgery that they hoped would get them on the road to extreme weight loss.

The stories were very sad, and the surgery scenes were very graphic and difficult to watch. I remember at least one episode ending with an on-screen postscript informing viewers that the subject of that evening’s show had subsequently died.

These stories are now on TLC, in the form of this regular “600-lb” series. This past Wednesday, an obese woman named Charity (that’s her in the photo accompanying this blog post) struggled with the usual obesity-related health issues -- both emotional and physical -- until she had lost enough weight to qualify her for surgery (she was advised that she needed to get her weight under 600 lbs and she just made it at 597).

Charity wasn’t going in for a bariatric bypass, one of the procedures seen typically on these obesity shows. Instead, she was having excess fat cut off of her -- an amount that topped off at 57 pounds worth (this excess “tissue” was weighed on a scale in the operating room). When the hour episode ended, Charity was saying she felt optimistic about her future, although she still looked very obese compared to most of us.

After that show came this other TLC series called “Strange Love,” which tells stories about people with unusual characteristics and their quest for love. Wednesday night’s show featured a young bearded woman in one story who already had a bearded husband who didn’t mind that she had a beard too, and a second story about a black albino man who went on a series of dates.

I will openly admit right here that watching this bearded lady was uncomfortable to me because I have never seen a bearded woman before, except in old photos of carnivals. As the show explained, this woman on “Strange Love” grows whiskers due to a hormonal condition that afflicts a small percentage of women who grow excess hair on their faces and elsewhere.

The main conflict for the bearded lady on this show was this: Should she shave her beard for a ceremony in which she and her husband of five years were going to renew their wedding vows?

TLC is also the network that now has at least three regular series about dwarf families. (I wrote on this subject in a recent blog post.)

What’s the point? Just this: That in a crowded marketplace in which hundreds of TV shows are vying constantly for viewers’ attention, TLC seems to be stepping up its reliance on shows whose imagery -- obese people, a bearded lady, a family of seven dwarfs -- appears to be designed to stop channel-grazers in their tracks and make them settle on TLC.

Back in the 1990s, someone coined the phrase “video Velcro” to describe this kind programming and it’s no less valid today. Now more than ever, TV networks are being challenged to come up with ways of grabbing viewers and making them stick.

Bearded ladies and dwarfs are one way of doing this, I suppose, even if some might be tempted to accuse the TV industry of adopting the same methods and values that got carnival patrons into sideshow tents.