'Mad Men' Poses Existential Question: Is That All There Is? 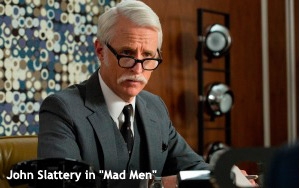 “Mad Men” has gone and gotten all existential on us.

That’s one way of interpreting the prominence of the Peggy Lee song “Is That All There Is?” in last night’s final half-season premiere of everyone’s favorite TV series about the advertising business (in addition to “Bewitched,” of course).

The song's title is an existential question if there ever was one. Recorded in 1969, it was heard at the beginning and the end of the episode, framing an hour whose themes included matters of life, death and sex.

The “death” was Rachel Menken's. Played by Maggie Siff (who made a brief return in a dream sequence in last night’s episode), she was the Jewish department store heiress who had a fling with Don Draper (Jon Hamm) in 1960, in the first season of “Mad Men.”

In last night's episode on AMC, it was April 1970, and Don learned that Rachel had just died of leukemia. Her death was a symbol perhaps of how much had changed -- or more to the point, been destroyed -- in the 10 years since the “Mad Men” story began, 10 years that encompassed the whole of the 1960s.

Certainly, Rachel's death at a relatively young age (she was presumably in her 30s or 40s), was jarring to Don, whose emotions in last night’s episode ranged from brooding to fun-loving.

We have come to expect brooding from Don Draper, but “fun-loving”? That was a nice surprise. He seemed to have made his peace with two things: His upbringing and his marital failures. Concerning the former, he was seen in a late-night diner regaling Roger Sterling (John Slattery) and three slinky models with a story about his hardscrabble childhood -- an indication that Don is no longer hiding his raised-in-a-whorehouse origin story.

As for his marital status, he confirmed in the episode that he and second wife Megan (Jessica Paré) are splitsville, and no love interest seemed positioned last night to take her place as Mrs. Draper No. 3.

When it came to sex in last night’s episode, Don's "conquests" included a swinging stewardess he summoned for a late-night booty call, and a waitress in the diner who was seen reading John Dos Passos (“The 42nd Parallel”) during work breaks and misread a nearly $90 tip as some kind of downpayment for sex. Don said she reminded him of "someone," but I was unsure who he was referring to. Was it Rachel? Or maybe Midge Daniels (Rosemarie DeWitt), his free-spirited girl-on-the-side from Greenwich Village in Season One?

Last night’s episode -- the first of the final seven that will conclude the “Mad Men” story after seven seasons -- was subtitled “Severance,” which referred specifically to the story of account manager Ken Cosgrove (Aaron Staton). He was let go from Sterling Cooper at the behest of the firm’s new partners at McCann, which merged with (or bought) the firm.

Ken then considered doing something different with his life, perhaps writing the novel he had always dreamed of doing. In the end, though, he opted for revenge -- joining Sterling Cooper client Dow Chemical as head of advertising, a position from which he will get to bedevil the very people who fired him.

Roger Sterling was one of them. In last night's episode, he was still the brash, hedonistic Roger of old, but now sporting an end-of-the-sixties mustache. Other characters seen last night included Pete Campbell (Vincent Kartheiser) and Ted Chaough (Kevin Rahm).

Pete seemed especially glad to be back in New York, having apparently left L.A. for good, and now wondering whatever must have possessed him to move there in the first place.

Also on hand were Peggy Olson (Elisabeth Moss), who fell head over heels in love with the brother-in-law of one of her staff writers, John Mathis (Trevor Einhorn). This sudden romance had Peggy thinking about the meaning of her life too.

On the professional front, Peggy and Joan (Christina Hendricks) met with a group of male chauvinist pigs from McCann. Joan was offended by their remarks; Peggy was no less disgusted, but more sanguine. She just seemed to accept that it came with the territory.

However, the meeting may have been a sign that all is not well in Mergerland, where the combination of the McCann and Sterling Cooper cultures is concerned.

And now, it's on to Episode 2 next Sunday. The series concludes May 17.