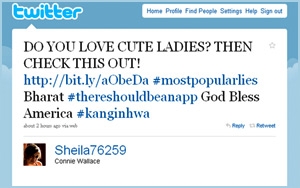 In fact, nearly 10% of all Twitter “users” who tweet in English are “non-consumers,” according to new findings from Networked Insights. Worse yet, these accounts are responsible for pumping out about 15% of all tweets, the analytics firm found.

The persistence of the problem is partly due to innovations on the part of spammers, says Jaime Brugueras, vice president of analytics at Networked Insights.

“Both the quantity and the quality of spam is improving, meaning that spam is harder for Twitter and other platforms to detect and filter,” Brugueras said on Monday.

On social, some brand conversations are entirely driven by spam. For Rite Aid and beauty brand Elizabeth Arden, a staggering 95% of branded posts and conversations, including their names, are classified as spam, according to Networked Insights.

With consumer sensibilities in mind, social giants have been working to reduce the rate of spam and other unwanted content.

Last year, Twitter admitted that nearly 10% of its userbase were bots, which automatically ping the site with updates. Yet, at the time, the company estimated that false or spam accounts represented fewer than 5% of its monthly active users.

Among other efforts to clean up its News Feed, Facebook recently took aim at spam, including scams -- “Click here to win a lifetime supply of coffee” -- and deliberately false or misleading news stories: “Man sees dinosaur on hike in Utah.”

Late last year, Instagram vowed to wipe out spammy fake accounts. As a result, some of the most popular brands on the network saw significant declines in their followings.