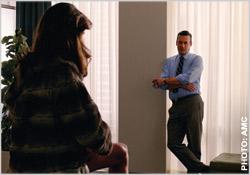 Though we would like it to be, "Mad Men" is not really about advertising. Instead, it’s about the death of the American Dream, using advertising as the come-hither window through which to watch the wreckage.

In “Severance,” the brilliant but at times frustratingly slow and disassociative eighth episode of the seventh and final (half) season, "MM" creator Matt Weiner goes deep with his usual mad obsessions: identity, otherness, and death.

For Weiner, there’s no business like “Is-That-All-There-Is-Ness.” (As sung by Peggy Lee, the tune was heard three times in the episode. But given the uber-existential question it poses, it should be the show’s theme song.)

And we keep going back to that same dark well, with many of the themes of this episode repeating from the first season, and even the first episode.

We will return shortly to the death parade, but first, some general housekeeping. The chronology seems to have moved seven months from the moon landing of July, 1969 to April of 1970. Gone is the youthful dream and activism of the 1960s; the country is moving into the disillusionment of the wide-tied, polyester-ish, Watergate-plagued 1970s.

Meanwhile, money is always a leitmotif of the show. In the last episode, we saw the barefoot, rich-as-Croesus partner Bert Cooper singing to an audience of Don that “The Best Things in Life are Free.” And even with the buyout, the partners (perhaps with the exception of Roger) hardly seem ecstatic about their windfalls. Mostly, others are counting their millions for them.

In response to Ken’s question, Pete complains that he might have to buy a building. After a horrible business meeting with three sexist pigs from McCann, Sterling, Cooper and Partners' father company, Peggy turns on Joan, and spits out “You’re filthy rich,” almost as if it’s a curse. 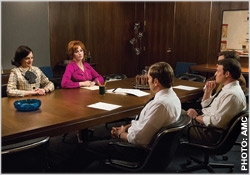 The biggest political news, which Don caught one morning while sleeping in his clothing on top of his bedspread (more on that later) is that President Nixon has announced his reversal of his de-escalation in Vietnam (how’s that for obfuscation of language?) and a fresh invasion of Cambodia.

Yup, a lot of the episode has to do, aptly enough, with de-escalation (Ken's firing, for one) and re-escalation. Don’s return to an impossibly chaotic sex life requires a pre-Siri answering service and constant office naps. On the advertising front, he seems to have gone back to his old creative director self in the pilot episode. The fur coat opening, complete with a casting couch of leering execs, seems like we are back in time.

As Don auditions one young, leggy model after another, he smokes and holds the definitive New York City blue-and-white paper Greek diner coffee cup. The design has Greek-style columns and the phrase “We are happy to serve you” in faux-Cyrillic lettering. This cleverly suggests “The Wheel,” the episode in which Don explains that in Greek, "nostalgia" literally means "the pain from an old wound... a twinge in your heart far more powerful than memory alone…. It's not called the wheel, it's called the carousel. It lets us travel the way a child travels -- around and around, and back home again, to a place where we know are loved.” 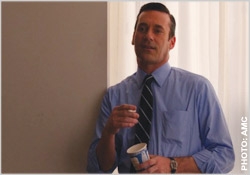 He stamps his cigarette out in the cup, and it sizzles.

Just where was Don, the “whorechild," when he was loved? Trying to find that place seems to require some sort of fugue state in which he's acting out sexually, powered by shame, guilt, and anger.

Unfortunately, we got a lot of him in this episode, through a dream he had about his old girlfriend Rachel, and especially in the hallucinogenic scenes shot in the Nighthawkesque diner (right out of the lonely, urban scene in the Hopper painting) with the dark-haired waitress.

Don seems to mix up sex with stains. Weiner could not have known that the episode would run on Easter Sunday, but there was a big trinity throughout. As Ted said, referring to the number the Wilkinson execs wound up choosing for their ad, it was about three women. Don and Roger were accompanied by three blowzy women in the original diner scene. Other women from Don's past were resurrected to perhaps add up to a trinity of brunettes, or even more.

After the diner, Don goes home to an empty apartment and decides to check in on the women he can tap, like hot- and cold-running water. He chooses the stewardess, who seems very “Coffee, Tea, or Me?” in her immediate availability.

She accidentally spills red wine on the white carpet near his bed. The blood-like stain, which he immediately covers up with the “comforter,” is a key scene and metaphor. He’s not willing to face any of the stains of the past and wants to dispose of them quickly, like the way he tosses Meagan’s earring. He literally fucks over it. And he obviously still holds on to some Madonna/whore hangups; but in his unique case, his mother was indeed a madonna and a whore. 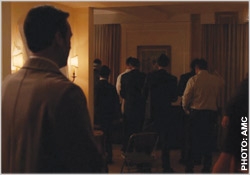 Blood is used in religious rituals. As it turns out, Rachel Menken Katz dies of leukemia, cancer of the blood.

The shiva scene was sheer brilliance. "Mad Men" is all about smoke and mirrors, and when Jews mourn the dead, they cover the mirrors. The focus is not on superficial externals, but rather on the internal worth of the dead. “Look in the mirror,” Don tells the fur model in the first scene. “What do you see?”

There were lots of death symbols knock knock knocking when Don pays a sympathy call -- not the least of which was when Dr. Katz had to go knock on neighbors’ doors to muscle up a minyan (ten Jewish men to do the mourner’s prayer).

Rachel’s sister says bluntly, “No, he can’t. He isn’t Jewish” in front of Don, who offers himself up. He's ever the outsider -- even though he brings cake and says he’s lived in New York a long time.

And that brings us to the quintessential New York diner, which Don kept returning to, like a moth to a dying, isolated flame. Some production people I know said that the diner set looked pathetically cheap. But the lighting seemed to recreate the old ochre walls and jade green tiles of the painting, also showing Don’s disassociative state when he keeps going back to the waitress, who seems so familiar to him, and asking, “Don’t I know you?”

She looks like an amalgam of Don’s mother, the prostitute, the working girl who gave him the Hershey bar for going through her John’s pockets, and Midge, the junkie artist. That’s three, plus all the sad dark-haired mistresses that our hero done wrong. Was he hallucinating? Generally, waitresses in the 1970s did not read John Dos Passos (who wrote about Depression-era America.) Or feel that they had to prostitute themselves in a back alley as a payback for a tip. 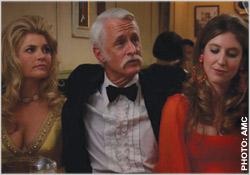 The fact that the waitress’s name was “Di” was a bit heavy-handed.

I have so much more to analyze: Ken, the eye-patch guy, going from fiction writer/Hathaway Man to a crazed Dr. Strangelove, riding the bomb, all for spite. After he’s “severed” he feels like he has died, and lost everything. He sits in a phone booth, and says he barely has the strength to “drag myself through those doors.”

And he resurrects himself to become the “client from hell.”

I didn’t even get to discuss Peggy, and whether she, who couldn’t find her passport (she gave at the office) and Don, who was told in the dream that he missed his flight, will end up together. Maybe.

But first, remember when Pete’s dad died in a plane crash, and his family was so cold and distant that he didn’t know what he should do? ''Go home and be with the family,'' Don told him. ''That's what people do.''

If only he could take his own advice. Or find the place where he is loved.

mad men, tv
26 comments about "Episode 708: The Trinity: Blood, Death, and Coffee, Tea, or Me? ".
Check to receive email when comments are posted.
Read more comments >
Next story loading