SquareTrade Told To Revise Boasts Based On Web Reviews 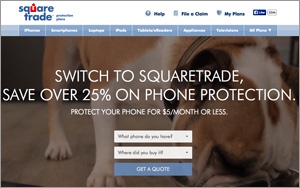 SquareTrade, which offers extended warranties on electronics, should stop boasting that its service is “Rated #1” by online reviewers, an arm of the Better Business Bureau said this week.

The BBB's National Advertising Division said that SquareTrade can instead brag that its service is “highly” rated. That statement -- which doesn't compare SquareTrade's ratings to other companies' -- “more accurately reflect SquareTrade’s high customer ratings by Amazon, Apple App Store, and Google,” the NAD said.

The decision came in response to a challenge by Best Buy's Geek Squad, which took issue with numerous statements on SquareTrade's Web site, including the boast: “Rated #1 by the people who matter most: our customers.”

GeekSquad contended that “blog reviews are not sufficiently reliable to support the claim that customers have rated SquareTrade #1 compared to other protection plans,” according to the decision.

SquareTrade initially offered to revise its claim to “Top-rated and trusted by those who matter most,” according to the opinion. But NAD rejected that wording on the theory that the phrase top-rated “also reasonably communicates an unqualified superiority message.”

The decision marks at least the second time the self-regulatory arm of the BBB has told a company to modify boasts that stem from good reviews online.

In October, the BBB's National Advertising Review Board directed Euro-Pro to stop boasting that Shark is the most recommended vacuum cleaner. Euro-Pro argued that the claim was based on its analysis of reviews at eight Web sites, including ones operated by Amazon, Bed Bath & Beyond, Best Buy, Costco, Home Depot, Kohl’s, Lowes, Sam’s Club, Sears/Kmart, Target, and Walmart.

But the BBB's appellate panel said that those reviews didn't support Euro-Pro's “broad” claim that it's the most recommended brand.