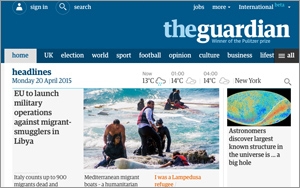 Previously, online visitors from outside these countries were directed to the newspaper’s UK home page with its focus on British news, much of it irrelevant to international readers. This focus will only become more pronounced during the final weeks of the general election, scheduled for May 7, 2015.

As international readers may not care about the intricacies of British electoral law or parliamentary coalition-building, it’s an ideal time to test an alternative home page with more global content.

The Guardian was quick to note that this does not mean it is committing to launching a global edition; it emphasized the experimental nature of the international homepage. Indeed, the Guardian’s director of digital strategy, Wolfgang Blau, noted: “And, to be frank, from looking at the global editions of many of our competitors around the world, we are also quite skeptical of the idea that there even is such a thing as a global news agenda or a global public sphere.”

Last month, the Guardian appointed Katharine Viner its new global editor-in-chief, making her the first woman to hold the top spot at the venerable newspaper. Viner had previously served as deputy editor of the newspaper and editor in chief of its U.S. edition, making her a key player in the newspaper’s ambitious global expansion.