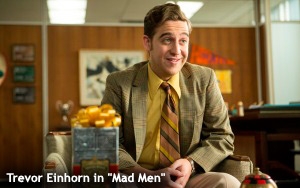 This Sunday night marks the halfway point in this brief, final mini-season of "Mad Men."

To be precise, the halfway point will fall at around 10:30 p.m. Eastern on AMC -- 30 minutes into the fourth episode of a half-season comprising just seven episodes. In less than a month, on May 17, it ends.

So what are we to make of this final glimpse of “Mad Men”? True to form, it is playing out like an old-school afternoon soap opera of the type that was prevalent in this series’ 1960s-early 1970s time frame.

I have made this observation before: With all the attention being paid to this show’s many literary and cultural references, few seem to notice that one of the influences on the making of this show seems to be the old soaps.

A lonely, divorced white-collar executive -- Don Draper -- has an affair with a sad-eyed diner waitress who drifted in from Wisconsin. A divorcee -- Joan Harris -- has a fling with a retired and very successful builder and developer while she’s on a business trip to L.A.

Megan Draper’s mother, Marie Calvert, has a daytime tryst with another divorced white-collar type -- Roger Sterling. They are caught practically in the act by Megan, who has discovered them because she herself has come from an abortive lunch where another executive -- Harry Crane -- has proposed they go to bed together in return for him finding her a Hollywood agent.

Many of these scenes are filmed in a manner reminiscent of the old soaps. They are claustrophobic and sepia-toned, particularly the scenes featuring Don (Jon Hamm) and the waitress Diana (Elizabeth Reaser). The three episodes seen so far seem pokey like the old soaps too -- as if this series has all the time in the world to meander to its conclusion.

That’s not the case, of course, since only four hours remain for us to learn the fates of this show’s many principal characters -- if that is what the producers of “Mad Men” intend. For example, what became of Peggy’s love for the brother-in-law of co-worker John Mathis (Trevor Einhorn)? How might that be affected by Mathis getting fired in last Sunday’s episode and possibly exiting the show?

Will Joan find happiness with the dashing, retired builder? Are Don and Diana splitsville? And what of Betty Francis? Are we done yet with this strange relationship she’s cultivated over the years with the neighbor boy Glen Bishop (played by Marten Holden Weiner, son of the show’s creator, Matthew Weiner)?

Will the recently enlisted Glen be killed in Vietnam? For that matter, will anyone die in the coming four episodes? Will Don get lung cancer from smoking too much? Will Roger have another heart attack, this time fatally? Will someone die in a car accident or an airline crash?

What will be the nature of the “Mad Men” finale? While “Mad Men” has already secured a place for itself in the pantheon of “quality” TV shows, final judgment on this show will depend, at least in part, on how it winds up. This is a show that has been continually lauded for its creativity. Expectations are running high for a finish that will be up to this show’s already high standards.

It’s doubtful it will end with a freeze-frame like “The Sopranos” -- although, like Tony Soprano in that show, Don Draper is the central figure in “Mad Men.” So it’s reasonable to expect that the last scene of “Mad Men” will involve Don.

Despite the remark above about him developing cancer, my hope is that Don doesn’t die. Instead, I would like to see him find the peace of mind in the 1970s that eluded him in the 1960s. Is that too much to ask?