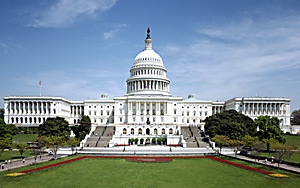 WiFi, Bluetooth and vehicle-to-vehicle safety communications could be on a collision course unless the government figures out a way to share spectrum.

Over the next few months, leaders on the House Energy & Commerce Committee will hold a series of meetings with officials at the Federal Communications Commission, the National Telecommunications and Information Administration and the Department of Transportation to discuss whether the 5.9 GHz band (currently dedicated to vehicle-to-vehicle safety communications) can be shared for unlicensed consumer use.

Unlicensed spectrum is high in demand as a way to unload traffic from wireless broadband networks that are struggling with growing demand. Making more of it available to the public is a priority for Google, Facebook, Microsoft, wireless companies, and others in the tech industry.

“Whether for Wi-Fi, Bluetooth, or the countless uses we have not yet dreamed of, unlicensed spectrum has been a source of tremendous innovation that drives our Internet economy,” Chairman Fred Upton (Mich.), ranking member Frank Pallone (N.J.), communications and technology subcommittee chairman Greg Walden (Ore.) and ranking member Anna Eshoo (Calif.) said in a joint statement.

The meetings are intended to examine ways to expand unlicensed spectrum in the band, as required by the Middle Class Tax Relief and Job Creation Act of 2012 -- the same bill that gave the FCC the authority to hold the broadcast incentive auction intended to free up more spectrum for wireless. That law directed the FCC and the NTIA to study whether the band is suitable for unlicensed use.

But while spectrum sharing is becoming a popular way to manage the nation’s limited spectrum resources, it’s easier said than done. The 5 GHz band has a number of government uses, but the portion devoted to Intelligent Transportation Systems gets the most attention. Allocated in 1999, the 5.9 GHz band was set aside for highway safety and vehicle-to-vehicle communications.

Sharing that spectrum makes the automobile industry, which has been moving quickly to develop to develop “smart” and “connected” car applications nervous

A coalition of automobile and transportation associations, including the ITS America -- the High Tech Transportation Association and the Alliance of Automobile Manufacturers opposed the Wi-Fi Innovation Act introduced in February by Sens. Marco Rubio (R-Fla.) and Cory Booker (D-N.J.) that would speed spectrum sharing by setting guidelines and timelines.

However, auto organizations are more open to the committee meeting process.

“Vehicle to vehicle communications systems potentially could eliminate 80 percent of all non-impaired crashes, so protecting this future lifesaving technology is important manufacturers,” said Wade Newton, a spokesperson for the Alliance of Automobile Manufacturers. “We’ve long said we do not object to sharing the spectrum space, so long as we can ensure that there is no harmful interference with safety critical communications.”

“More than a decade and a half after this spectrum was set aside for vehicle and roadside systems, we agree it is time to take a modern look at the possibilities for wireless services in these airwaves, to allow a broader range of uses. We believe by taking steps right now, we can support automobile safety, increase spectrum for Wi-Fi, and grow our wireless economy,” the FCC commissioners said.