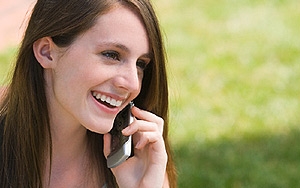 Google took wireless into its own hands Wednesday, with help from partners Sprint and T-Mobile, launching a service allowing customers to pay only for the data they use. Initially, the service will only work on Google's latest phones.

Project Fi, Google's program, provides an option for the company to explore new ways for people to connect and communicate. The $20 per month charge for voice, SMS, Wi-Fi tethering and international roaming in more than 120 countries becomes a first for the industry.

Each GB of data comes with free roaming, which costs an extra $10 per month. Any unused data is refunded. Users automatically connect to more than 1 million Wi-Fi hotspots when they're available, and rely on Sprint and T-Mobile's 4G networks when they're not.

The service is only available for Motorola Mobility's Nexus 6 phablet. While iPhone, Android and other smartphone owners may be disappointed for now, the move solves a huge issue in the industry for phone makers and advertisers.

The service solves a major roadblock for consumers not wanting to pay for cellular service for their phone, especially if they already pay for a smartphone.

"Project Fi automatically connects you to more than a million free, open Wi-Fi hotspots we've verified as fast and reliable," Nick Fox, vice president of communications products, wrote in a post. "Once you're connected, we help secure your data through encryption."

As like most of Google's beta project, Project Fi's Early Access Program is invite only to individuals who sign up for the service. Project Fi will be available on the Nexus 6, which Google developed with Motorola. Google also provides a map for coverage areas.