Kiss Him Good-bye: Now Dave's Getting A Real Send-off 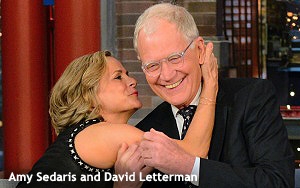 Finally, a real send-off for David Letterman is taking shape.

A few weeks ago, it seemed like Letterman was heading a bit too quietly into the final weeks of his legendary TV career. Suddenly, attention is now being paid to this television milestone.

The latest and perhaps best evidence of this: CBS' announcement this week that Letterman, who turned 68 earlier this month, will be saluted with a 90-minute prime-time special airing Monday, May 4. The special -- titled “David Letterman: A Life on Television” and hosted by Ray Romano -- is being billed as a complete retrospective of Dave’s career from his earliest days in television as a weatherman in Indianapolis to the present day.

Certainly, for this special to be truly comprehensive, it must include clips from his years as host of NBC's “Late Night” (from 1982 to 1993). And CBS' press release indicates, or at least implies, that the “Late Night” years will be a part of it.

Once upon a time -- in the years immediately following Dave’s defection from NBC to CBS in 1993 -- NBC was notably unwilling to part with clips and other “intellectual property” from Dave's NBC years, for anniversary specials and the like. The hope here is that NBC's attitude on Letterman has softened over the years, not least because NBC still rules late-night and more to the point, Letterman was never able to unseat Jay Leno (and now Jimmy Fallon) as late-night's top dog.

At this point, with only 19 shows left (including tonight, Friday), it's safe to say Dave never will either -- except maybe on his final night of May 20. It's the final evening of the May ratings sweep (and the 2014-15 TV season), which means Letterman's competitors, Jimmy Fallon and Jimmy Kimmel, will likely have new, original shows that night.

So the question is: Will the two Jimmies openly salute Dave on their own shows that evening, and thereby drive viewership to CBS? Or might they even abdicate and go dark on that evening in deference to Letterman, an icon both of them say they idolize (especially Kimmel)?

In these weeks leading up his final “Late Show,” many of Letterman's guests have been long-time stalwarts making their last visits and saying their final farewells. Alec Baldwin was on recently, and Elvis Costello performed last night -- his 27th appearance on a Letterman show. On Wednesday, Bruce Willis was on the show -- his 61st visit on TV with Dave.

Dave's been showing old clips too in recent days (if not weeks). Thursday night's show featured a clip from November 1995 -- a bit Dave did in which he drove around L.A. in a 1970s convertible, giving out free tacos and having some fun in an auto shop with a group of mechanics. The bit gave me a twinge of nostalgia: The only time I ever interviewed Letterman was at about that same time, on the phone, following a bitter battle with his public relations department over access to him that lasted about six months.

That's a long story I won’t go into here, but suffice it to say that from the standpoint of a long-time journalist on the TV beat -- i.e., me -- Dave's exit represents a very personal end of an era. He is one of only a handful of personalities in the era in which I have covered television who a journalist could rely on to provide subject matter for stories and columns time and time again for years and years and years. I am guessing I have written about Letterman literally hundreds of times.

Only a few other subjects and personalities match Letterman -- in my career and the careers of many of my peers who have covered television in the Letterman era: Howard Stern is one, Oprah Winfrey is another, and Jay Leno is too (at least for me).

It's why I keep returning to the subject in these last weeks of Letterman’s reign. Yes, he might not be No. 1 in the ratings, but his longevity -- particularly at CBS these last 22 years -- is still a reign. You might even call him the reigning King of Late-Night, if only for these last few weeks.

tv
1 comment about "Kiss Him Good-bye: Now Dave's Getting A Real Send-off".
Check to receive email when comments are posted.
Next story loading