Apple Watch App Store Will Have A Different Dynamic 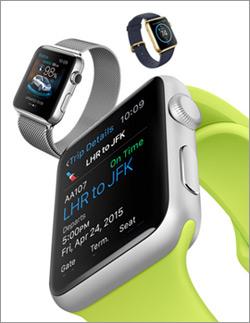 Apple CEO Tim Cook has boasted that, out of the gate, the Apple Watch App Store already has over 3,000 apps. This brings back memories of the launch of the original Apple App Store years ago, when passing volume milestones seemed like a good thing.

As we came to understand soon enough, there were diminishing returns to having hundreds of thousands of “choices” in an app store. Most mobile users only wanted or needed a handful of core apps anyway. Worse, the crowded marketplace created weird new economies of app discovery and app install advertising: windfalls for players like metrics companies and Facebook, but sources of more clutter and irritating advertising for the consumer.

I hoped that the specialized functionality of the Apple Watch would impose some new restraint in app releases. But the relentless flurry of Watch apps and extensions wiped out that hope in a hurry. Just about every major app on my iPhone deck updated with an Apple Watch extension in the last week. When my Apple Watch finally arrives in coming weeks, I expect to go through a few weeks of determining which of my current apps are least irritating when paired with the Watch. It's unclear whether the new device itself will expand the app ecosystem.

In one of the first research reports on the new Apple Watch App universe, IHS Technology predicts that this marketplace will not enjoy the same massive success as its predecessor. These apps will be an extension of, not replacements for, the iPhone experience, the report says. Different categories will dominate, and apps will be critical to the device’s success in the end.

IHS says it's clear Apple has been successful in driving the development community towards the new device. By IHS' count, only five days after the device's launch, 38% of the top 100 grossing and 29% of the top 100 free Health & Fitness apps were Apple Watch-compatible.

Great Apple Watch app performance will be important to the device’s appeal. But this is unlikely to drive a new app ecosystem. In most cases, people will already have on their iPhones the apps they're extending to the Watch. This won’t provide quite the same opportunity as the original App Store did in acquiring new customers simply based on the app’s strong Watch execution.

Unlike the original App Store, whose success was and continues to be driven by games, for now health & fitness is the main category driving the Watch. But smartwatches will need to generate compelling use cases beyond this category if they expect to break out of niche status, IHS analysts say. Outside of health & fitness, the weather, travel, news, navigation and social networking categories have the highest shares of their top apps already extending into the Watch.