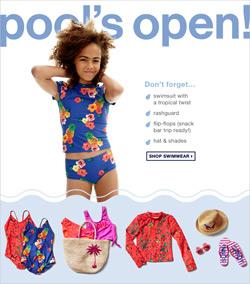 While The Gap may be struggling to attract women into its stores, it’s got a plan for tapping girl power: It has just announced a partnership with talk show host Ellen DeGeneres, creating a new line called GapKids x ED. Describing it as “an apparel collection and social movement supporting the strength and power of girls,” the San Francisco-based company says the clothes are scheduled to appear at GapKids beginning in the August back-to-school season. The intent is to create a collection that reminds girls they “have the power to do extraordinary things.”

"We know our customers love Ellen as much as we do," Gap Global President Jeff Kirwan says in its release. "We look forward to launching the collection in time for back to school as it enables us to champion girls in a way that continues to be true to our brand's heritage, which has long stood for supporting youth.”

While the Gap’s Old Navy division has been doing well, the San Francisco-based retailer has been wrestling with persistent declines in its flagship brand. In its most recently quarterly results, it posted a 7% decline, and then in March, sales again fell 7%. (The company reports its next quarterly results in a few weeks.)

Following a meeting with company executives, analyst Ike Boruchow, who covers the company for Sterne Agee, writes that Gap’s stumbles with women stem from “marketing challenges and consistent fashion missteps. Specifically, management noted that women's tops are not feminine enough, colors are too neutral, dresses are not flattering and marketing campaigns are not reflective of the brand. Unfortunately, the assortment issues have caused their core customer to age, since the younger demographic has only had negative experiences with the brand.”

And while the company's design teams are hustling to make small fixes, “the team likely won't be able to make any material changes until Spring 2016.”