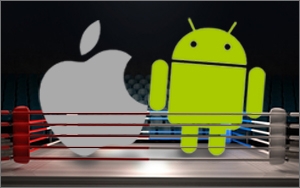 The Google Android platform has always been about tonnage -- brute force -- a scale play of the highest order. Make the OS free, allow for cheap iterations on a global basis, and gobble market share voraciously. This strategy was willing to sacrifice, if temporarily, key aspects like monetization for quality of apps, depth of engagement, etc.

For years Apple’s iOS seemed to easily leverage its minority market share into superior engagement for users, money for developers, and richness of apps. Many of us wondered what exactly Android users were doing with all of those devices, if not using the digital channel or even viewing ads much. As we have covered here before, that picture was always too generalized. At the upper end of the Android handset line, we did see behaviors that resembled iOS.

Still, overall ad revenues from Android always lagged behind iOS because the rates usually were that much lower, even as overall ad impressions on the Google OS surpassed iOS about a year ago. According to Opera Mediaworks, one of the largest ad platforms for mobile (850 million uniques, 18,000 sites and apps), Android has finally surpassed iOS even in ad revenue. In its most recent “State of Mobile Advertising” quarterly report, the company says Android now accounts for 65.17% of ad traffic and 45.77% of revenue. Meanwhile iOS accounts for 22.34% of ad traffic and 45.44% of revenue.

Apple eyeballs continue to monetize much better than Android, garnering more income per impression. Part of this is driven by the iPad, which still see four times the revenue of Android tablets.

Apple is also the platform to beat when it comes to video advertising, where it is responsible for 56.57% of traffic and 62.69% of revenue. iOS users have a far higher completion rate (87.2%) than do Android users (76.7%). This is important, because the share of overall ad impression Opera Mediaworks is seeing from video has increased fivefold, from 2.5% in Q1 2014 to 12.8% in Q1 2015. Meanwhile, revenue share from video has skyrocketed to 55%.

Ultimately, iOS is still commanding much higher CPMs. With tablets off the table, comparing iPhone to Android handsets, the ratio of share of revenue to share of impression is 1.59:1 for the Apple platform and .68:1 for Google’s. And in some measure it is earned. Apple audiences are simply engaging ad content more.