Episode 713: 'You Knew We'd Catch Up With You Eventually' 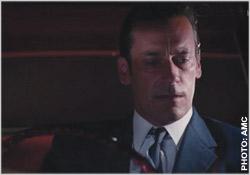 Could Matthew Weiner have actually planned that “The Milk & Honey Route” — the second-to-last “Mad Men” episode of this final half-season, with its shockeroo death sentence for Betty — would appear on Mother’s Day?

Who knows what supernatural scheduling powers he has. But that’s how it turned out, leaving us with the picture of three innocent little kids losing their beautiful young mommy — just as she had found happiness by starting graduate school.

How’s that for a non-sentimental kick in the big-girl pants? Toto, we’ve been in Kansas too long.

Actually, much of what happened in this episode felt shocking, like Don getting smacked in the face with an Oklahoma phone book. In what seemed like a bizarre, switched-on version of the Wizard of Oz, Dead Souls division, everyone was Dorothy, newly aware that “there’s no place like home.”

So let’s see: home, money, fathers, mothers, and the number three were also big themes in the show. 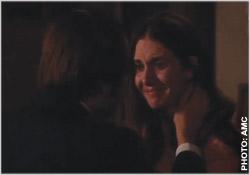 Pete, the least-loved character, surprises us all by reuniting with Trudy, who has let her hair down, literally and figuratively, and cute daughter Tammy, who got “stinged.” Now the consummate account guy, Pete pulls off his own sting, selling Trudy on the prospect of perfect Burger Chef happiness in Wichita, Kansas. He keeps talking about the “three of us going to dinner,” just like that scene with Peggy, Don and himself beaming and eating at the Burger Chef table in the second-to-last episode of last season.

In a hilarious scene in a much fancier New York eatery, in which Pete’s pudgy, balloon-faced banker brother maintains that his wife is delighted to know that he is attractive to other women, Pete sees that they are both repeating their own father’s crummy cheating behavior. He’s done. He seems to realize that hurting Trudy hurts himself.

Remember that Pete’s dad died in a plane crash, and Weiner seems crazy about planes randomly falling out of the sky as convenient plot devices. We’ll see how grounded the former weasel can remain as a Wichita lineman, who stays on the lines. 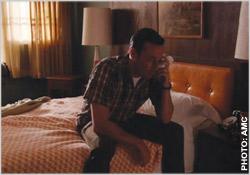 Meanwhile, Don is stalling out on his yellow brick road, transitioning into Dick, an Elvis/Kerouac/Jesus figure (another trinity.) Right before our eyes, he’s becoming a blue-collar soul (carpenter, typewriter fixer, Coke machine repairman?) who is good with his hands, and traveling light with a small plastic Sears bag.

Pressured to extend his stay in Alva, Okla., to attend a veteran’s fundraiser, Don/Dick donates pots of money to the guy who sloppily burned down his own kitchen. Burning down the house: that’s a loaded symbol for Don, who has stripped himself of almost all of his worldly goods, including his house, his half-million-dollar stock deal with McCann, and the million dollars he gave to Megan. Thus, it’s rich that he tells Sally that she knows nothing about money.

Turns out that the American Legion Hall actually doubles as the ninth circle of hell — if that’s where the cannibals who pop human eyeballs are sent. And it’s not over, even after the fat lady jumps out of the cake. Actually, Don gets drunk enough to reveal the last scrap of his big lie: that he actually killed his commanding officer in Korea. His fellow as-yet-undiagnosed PTSD victims assure him “You have to do what you have to do to get home." 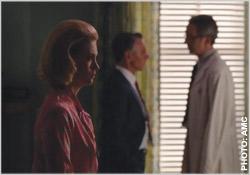 Later, back “home” on the range, at the motel, Don is in bed, just like Dorothy at the end of the movie, and gets visited by local alternate versions of the Scarecrow, Tin Man, and Cowardly Lion. Except here they take the form of the three alcoholic vet “hooligans” from the fundraiser, all of whom need new hearts and brains, if not the right kind of courage. They viciously kick the shit out of their fellow vet over a misunderstanding about money.

Don was set up by his young doppelganger, the hustler with “shitty instincts,” whose grammar he corrects. Trying to keep young Dick Jr. on the right path, not the detour he took, Don ends up shedding his last status-y possession, and gives the kid his Caddy.

The episode title is taken from an old hobo term for the train routes with the best food. And Dick/Don’s violent experiences suggest a return to his own brutal upbringing in the Midwest, before his father died after being kicked in the head by a horse. It also alludes to “The Hobo Code,” the first season episode in which whore-child Dick learns from a passing hobo that his dad is not an honorable man. Perhaps connecting those dots will help Don, like Pete, decide not to repeat the sins of the father.

But back to Betty, who has her own cross to bear. In her own Dark Dorothy moment, after her husband has been given her metastatic lung cancer diagnoses by her doctor, who ignores her (an infuriating indignity that was the custom at the time) she returns to their car. While Henry wonders whom he could sue or intimidate with his Rocky-based power, brave Bets soldiers on, as unfussy as her perfect helmet hairdo. “I want to go home,” she says. 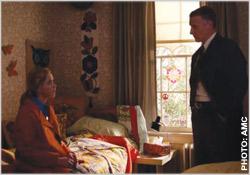 By this, she meant not only Henry’s dark Victorian pile in Westchester that the family occupies, but also her maiden family’s cemetery plot.

Actions have consequences. Just as Don dreamed that the police were chasing him, telling him “You knew we’d catch up with you eventually,” we knew that statistically, some of the chain-smoker characters had to get cancer. But I never expected that it would be Betty, who isn’t yet 40. (Props to commenter Tom Siebert, who predicted the correct person’s death from cancer.)

And here are the two death harbingers from last week -- which, when I remembered them, threw me for a loop: Roger playing the organ, with its funereal sound, and Don’s goodbye to his ex-wife as he leaves the kitchen where she’s busy smoking and reading Freud, having dismissed his shoulder rub. “Knock ‘em dead, Birdie,” he whispers. Chills!

I go between identifying with Peggy and Sally, so in this episode, I cried my eyes out for a newly mature, generous, cool, non-bratty Sally. So much is being dumped on her slender teenaged shoulders by both Henry and her mother, but she’s not crumbling. Henry makes a surprise visit to her boarding school to tell her about her mother’s secret disease, and Sally’s the one who has to comfort him when he breaks down. 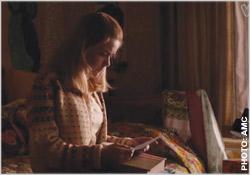 Betty might have been reading about the case of a female hysteric in the kitchen during Don’s last visit, but she is far from that. In fact, she seems oddly euphoric. Painfully holding on to the 1950s era pin-perfect propriety she was brought up on by her own cold, critical mother, she seems to look forward to finding the control in her death that she did not have in life.

I cried for Sally when she appeared in the kitchen, seeing her mom for the first time after hearing the terrible news. Betty, mad at Henry for telling the secret, sees Sally and walks right by her without so much as a hello, never mind a hug. It’s ridiculously frigid, even for the classic refrigerator mama. Most kids would have screamed and bolted, but Sally goes over to comfort her little brother Gene.

That night, Betty gives her non-adult daughter a letter telling her that Henry will be “useless,” and Sally will have the responsibility for handling the funeral arrangements. It’s all about interring the “in tact” body. 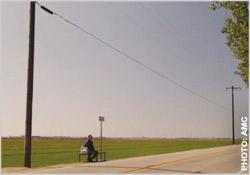 Betty even mentions that the sky-blue (heavenly) gown that she wants to be buried in is in a “garment bag” in her closet. That brought back memories of our first example of Betty’s grossly narcissistic mothering: when a six- or seven-year-old Sally put a dry cleaning bag over her head and ran out to show her mother. Betty was worried that in grabbing the plastic bag, the kid had messed up the clothing in the closet. But maybe she has grown, or learned something from her psychology courses, or gotten more generous.

Betty does address her daughter at the end of the letter, saying she'd been worried about Sally before. And then she says "I love you." (Is this the first time she's ever said it?) She ends by telling Sally that her life will be an adventure. Maybe that’s enough for Sally to hold on to.

In the meantime, Dick/Don also looked blissful, a rambling man sitting at a bus stop in the middle of nowhere.

What’s happening next week? I pray that Don gets back to New York and his kids. Maybe it will all end with Betty’s funeral, for which Don will prepare a sizzle reel, reliving their greatest hits, and his performance at the “Wheel.”

But we’re also faced with the grim reminder that three of the women Don has cared about most in life have died from cancer: Betty, Rachel Menken, and Anna Draper.

I hope Don is able to find a home with his kids — maybe even in Anna territory, where he is happiest. In a life that comes full circle, maybe he’ll end up not a furrier, where he started in New York, but as a farrier, shoeing horses. Wouldn’t that be a kick in the head? 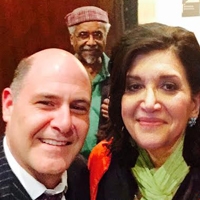 P.S.: Barbara, who jokes that she is getting her Ph.D. in Madmenology (see her selfie with Matt Weiner at left) will be interviewed about the last episode of "Man Men" by Steve Smith, MediaPost's Editorial Director, Events, on May 19 at 5 p.m., at MediaPost's APPY Awards Party. Register for the APPY party (at Internet Week HQ, 125 West 18th Street) here.

Barbara is also leading a panel on "The Real Mad Men: A Discussion with Leading Creators and Executives from the Mad Men Era" at the Museum of the Moving Image, on May 13 at 7 p.m.

mad men, tv
34 comments about "Episode 713: 'You Knew We'd Catch Up With You Eventually'".
Check to receive email when comments are posted.
Read more comments >
Next story loading