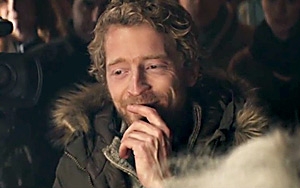 Professional videographers have enough to worry about with the visuals to be overly concerned with how their audio is turning out. With a new “Relax, it’s an AVX” campaign, Sennheiser aims to show how its wireless microphones can give a little peace- of mind.

The centerpiece of the campaign is a three-minute video on YouTube that opts for storytelling over specs. The video from German agency Philipp and Keuntje depicts a lone videographer venturing deep into a remote mountain village as a man — known as “The Oracle” — is about to wake from a 10-year slumber to receive one question about the future before he falls back asleep. As the videographer sets up his gear, The Oracle begins to stir. As the videographer plugs in his AVX wireless microphone, the village leader questions whether the sound will be good. The Oracle awakens to proclaim, “Relax, it’s an AVX,” and falls immediately back into another decade-long sleep.

“The purpose of the video is to understand the situation our end users are in,” Uwe Greunke, director of global and brand marketing at Sennheiser, tells Marketing Daily. “They’re on their own and doing something in the outback. The main message is you can lean back and not worry about something going wrong.”

“The special thing [about the AVX] is that its so small, and it really takes care of the rest,” Greunke says. “This is the first device that is really made for the camera.”

The videos will be supported with online, print and social elements, as well.