Bravo's New Upper East Side 'Mom' Is Not A 'Real' Housewife 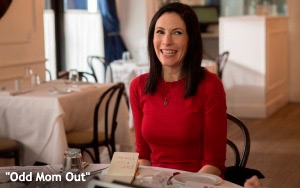 Bravo’s new scripted comedy series “Odd Mom Out,” about pampered wives on Manhattan’s Upper East Side, could be seen as a scripted version of all the “Real Housewives” series that have long been Bravo’s bread and butter.

On the other hand, are the “Real Housewives” shows truly unscripted? Probably, some of what you see on “The Real Housewives of [Fill in Blank]” is unscripted, but some is not -- particularly when it comes to story arcs, which would seem to be at least outlined, if not outright scripted.

With a sitcom such as “Odd Mom Out,” though, there’s really no question about the presence of a script. I previewed the first three episodes of “Odd Mom Out” (the first one premieres tonight, June 8 at 10 Eastern on Bravo), and there was no sign that any scenes are unscripted or, more to the point, improvised.

Improvised comedy is a hallmark of some recent sitcoms – most notably, “Curb Your Enthusiasm,” on which many scenes were based on loose outlines and then wholly improvised by Larry David and some other character he suddenly encountered.

Confused? Sorry, but such is the state of television these days, at least in the comedy realm that is the subject of this blog post. As a result, you have comedies such as “Curb” that are not totally scripted but partially improvised, and so-called “reality” series such as “Duck Dynasty,” for example, whose creators openly admit is at least partially scripted  (and probably more than just partially) and made expressly to look like a scripted sitcom.

Whether the “Real Housewives” shows are dramas or comedies depends on your point of view. It’s certainly dramatic when the “housewives” fly into rages and turn over tables. Such scenes also strike many people as hilarious.

No tables were overturned in the three episodes of “Odd Mom Out” that I previewed. In this way, the show is actually quite different than the “Real Housewives” shows. In “Odd Mom Out,” the “odd” mom isn’t temperamental, she’s just kooky – like a character Carol Burnett might have played on her old TV show.

“Odd” mom (played by Jill Kargman) is an Upper East Side housewife (I think the preferred term these days is “stay-at-home mom”) named Jill Weber whose “odd mom out” status stems mainly from an income disparity with the other stay-at-homes in her peer group. Her husband is “merely” a Manhattan attorney who only recently became a partner in his firm. They live with their two young children in a walk-up apartment in the low 60s east of Third Avenue.

The women with whom she interacts – except for her best friend, an unmarried physician who lives in Soho -- are all blonde snobs whose husbands are gazillionaires. Predictably, these women are obsessed with getting their kiddies into the right nursery schools, dieting, going to day spas and undertaking charity work.

Happy-go-lucky Jill is supposed to come across as a person who’s not interested in any of that stuff. But in fact, on the show, she is interested in all of it. While it would have been nice to have developed the Jill character as someone who rebels, at least occasionally, against the materialism of her Park and Madison avenue neighbors, you actually form the opposite impression -- that she’d gladly grab everything the other women have, if only she could afford it.

I will say this about “Odd Mom Out”: Based solely on tonight’s premiere, I might have consigned the show to the trash heap of TV sitcom history, but after three episodes, the show grew on me. This was due mainly to the storyline of Episode 3, which had Jill and her snooty in-laws applying for entry into New York City’s most exclusive cemetery.

It was a welcome and creative twist on the clichéd “gotta-get-my-kid-into-the-best-preschool” plot line that takes up portions of all three of this series’ first three episodes and threatens to continue into even more of them.

The success of “Odd Mom Out” will depend on whether viewers get caught up in Jill’s life and, even more importantly, develop enough affection for her to root for her and tune in each week to see what she’s up to. After three episodes, I’m undecided if viewers in sufficient numbers will care enough about her to follow her antics through an entire season, much less a second one.

The other thing presenting a challenge for “Odd Mom Out”: Bravo is not exactly a destination for people seeking scripted TV shows, although its first effort, “Girlfriends’ Guide to Divorce,” earned a renewal for a second season.

For most of us, Bravo is known chiefly for endlessly repeated episodes of its “Real Housewives” shows -- so much so that most of us cannot distinguish one from the other. In this regard, Bravo’s getting stale. Maybe scripted shows like “Girlfriends’ Guide” and “Odd Mom Out” will be just what the network needs.