Williams' Interview Was Painful To Watch, And Also Unnecessary 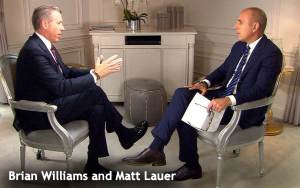 Was this interview really necessary?

Maybe it was simply too tempting on the part of NBC News to put Brian Williams on TV in an interview with Matt Lauer in the belief that this two-part conversation would give “The Today Show” some kind of a lift in the Friday ratings.

That might even turn out to be true when the numbers get generated. But it’s also possible that many people may have quickly judged this cringe-worthy interview to be unwatchable and then switched elsewhere.

Part One was about twice as long as Part Two. In Part One, Williams was called upon -- again and again and again -- to explain why he lied and own up to it. To my ears, he did both. And yet, to so many other commentators on Friday morning, he came across as cagey and evasive, unwilling to just come out and say “I lied.”

What he did say was this: “I said things that weren’t true. Looking back, that’s plain.” And a little later in Part One, he said this: “I told stories that were not true over the years.” To me, there’s little difference between these statements and the two-word statement, “I lied.” And yet, the self-righteous critics -- who evidently never made mistakes in their entire lives and who evidently think Williams should now be unemployed for life for his mistakes – insist that he didn’t “own up” to what he did.

I heard him say this, however, more than once: “I own this and I own up to this.” How much plainer could the man be?

Cynics are pointing out that the whole interview -- from Lauer’s questions to Williams’ answers -- was carefully planned and merely a part of a long-range strategy now in place in manage the rehabilitation of Williams’ public image. To which I have to respond: So? Is Williams not entitled to at least try?

In the four-and-a-half months he has served so far in his six-month suspension from NBC, Williams has apparently been very introspective. He didn’t specify whether or not he’s had the help of a therapist in this process, but it seemed as if he has.

“It is clear that after work, after I got out of the building, when I got out of that realm [and appeared elsewhere such as the late-night talk shows], I used a double standard,” he told Lauer, in an attempt to explain the mindset in which he told the tall tales that got him in trouble. “Something changed,” he said,

“It had to have been ego that made me think I had to be sharper, funnier, quicker than anybody else,” he said. “I was not trying to mislead people. I tried and failed.  … It came from a sloppy choice of words.”

It was painful to watch him struggle to explain himself in this way, a spectacle that triggered the question that starts off this blog post about the necessity of this exercise in the first place. My own answer to the question is no, we didn’t really need to see this, and Williams didn’t have to be put through it. Others are free to disagree.

In Part Two of the interview, Williams was given an opportunity to talk about his new role, announced Thursday, as an anchor of breaking news on MSNBC, starting in August.

One portion of this interview had me cringing for different reasons. On the subject of breaking-news coverage, he said this: “People still come up to me and say, ‘I was with you the night of [the explosion in 1996 of] TWA flight 800’ [and] ‘I was with you the night Lady Diana died’.” Really? They “still” say exactly these things to him? The statement came across as hyperbolic, and made you wonder if Williams was still making “sloppy” word choices, in spite of himself.

He also revealed that he’s not a gifted headline writer when Lauer asked him to “write the headline” on his own comeback story. Williams came up with this: “A chastened and grateful man, mindful of his blessings, mindful of his mistakes, returns hoping for forgiveness and acceptance.” No newspaper on Earth would ever publish such a thing.

After Part Two had ended, Lauer gave this assessment from the “Today Show” couch: “I do believe in second chances,” he said, as Al Roker added: “I think most of America does, and wants him to succeed.”

No, Al, I wanted to say, only someone who lives his life in the media bubble would think “most of America” wants Williams to succeed. In the real world, “most of America” doesn’t give a rat’s patoot if he succeeds or not.