Fear Of A Tech Planet: Robotic 'Humans' On AMC 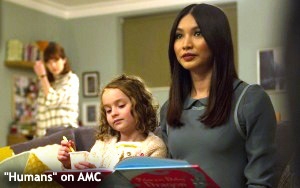 From “Mr. Robot” on USA Network to a whole ’nother category of emotionless creatures on AMC’s “Humans,” TV’s summer of sci-fi is up and running.

While the title character of “Mr. Robot” (premiering Wednesday night on USA) is a human computer whiz with an emotion deficit, the “humans” of this new AMC series are an advanced generation of robotic servants that are evolving in such a way that they are acquiring human emotions such as love.

In this eight-part series -- produced in the U.K. and premiering this Sunday on AMC -- the “robots” are so lifelike that the lines are blurred between who’s a “real” human and who (or what) is not.

Credit for this illusion goes to the actors playing these robots, the directors coaching their performances and the makeup people who smoothed their skin and outfitted them with colorful contact lenses.

While watching the one-hour premiere of “Humans,” I found myself peering closely at the faces of these robots -- branded by their manufacturers and marketers as “Synths” (short for synthetic) -- to see if I could catch an eye-blink. I detected only one in the entire hour. Chalk one up for the show’s editors too, who I guess were on the lookout for blinks and cut away just in time.

Watching “Humans” is an unsettling experience. This is a “near-future” sci-fi series that takes place in an unspecified year, but one that is not far from our own and easy for us to recognize.

At the center of “Humans” is a typical middle-class family -- a white-collar mother and father with three children, a young preteen daughter, a teenage boy and an older (and very sullen) teenage daughter.

With their lawyer Mum often away for days at a time, Dad impulsively purchases a Synth to keep the house and help him mind the children. His Synth is a lithesome, vaguely Asian beauty that the family names Anita. And as you can likely guess, this Synth’s presence in the household almost immediately upends the family’s equilibrium -- although it was already unsteady.

Mum in particular is threatened by Anita as youngest daughter Sophie begins to bond with her (or should I say “it”?). In many ways, the Synths are ideal “humans” -- flawless both physically and in their ability for undertaking chores for which they can be programmed and then executing them perfectly.

For these reasons, some real humans love the new technology and welcome it, while others feel envious of and threatened by these new “humans.” In the show, the omnipresent Synths are portrayed as a technology that seems to have arrived only recently, but has already transformed society.

In that way, this new generation of artificial intelligence is eerily similar to the technological innovations that have upended our own lives in recent years. Like the intrusive Synth servants, our new and constantly evolving personal devices have proven to be a distraction in our households and, in many cases, a bone of contention between family members.

In “Humans,” the Synths are evolving so quickly that a small group of them have gone rogue. in addition to forming human-like attachments to each other and “real” humans, these evolving Synths are even on the verge of seeking some kind of freedom -- a kind of quasi-independence. A handful of humans have become aware of this evolution, and some want to rein in the Synths and others want to aid them in their evolution toward full human-ness.

After I finished watching Episode 1 of “Humans,” I was eager to find out what happens next. That’s a good sign for any new TV show.