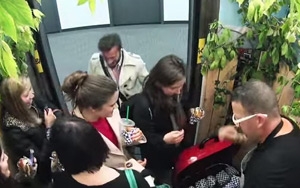 Elliot and other celebrity chefs have created their own recipe twists on classic BBQ favorites, each of which they've paired with one of the four Mike's flavors found in the new variety pack (lemonade, peach, black cherry and apple).

To kick off the campaign, Mike's shot videos of Elliot throwing surprise "backyard" barbecues in the elevator of a Chicago office building (screen grab shown) and on the city's Magnificent Mile. The YouTube-hosted videos of the events were promoted on Mike's' social media channels.

Four other celebrity chefs' combos are being featured on Tasting Table, an online network for culinary enthusiasts.

In a separate branding initiative, Mike's is sponsoring a 25-stop summer concert tour featuring country music star Frankie Ballard. Each show will feature a Mike's "backyard" area. At five shows, select fans will be treated to an exclusive live performance and have the opportunity to "hang out" with Ballard.