Easy Solution To NBC's Trump Problem: Sever Ties With Him 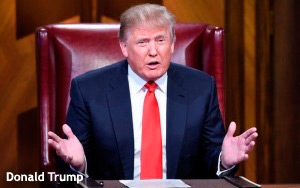 NBC now has two statements out there concerning Donald Trump.

One of them was issued late last week after Univision said it would drop its planned simulcast of this year’s “Miss USA Pageant,” scheduled to air July 12 on NBC.

Univision’s decision was no surprise, since the company serves a large audience of Mexicans, both in the U.S. and Mexico. It was only natural that Univision would drop a show associated with Trump, who angered many Spanish-speaking people (and especially Mexicans) when he decried the quality of Mexicans who have emigrated to the United States.

NBC issued this statement last Thursday: “Donald Trump’s opinions do not represent those of NBC, and we do not agree with his positions on a number of issues, including his recent comments on immigration.”

The statement sidestepped the central issue, which is whether or not NBC will be joining the chorus of boos that have erupted ever since Trump made his remarks about Mexicans in his speech announcing his candidacy for the presidency on June 16. Evidently, no decision has yet been made about dumping next month’s pageant telecast.

The pageant, which Trump owns, is one of two productions in which NBC is in business with Trump. The other is his long-running reality show, alternately titled “The Apprentice” or “The Celebrity Apprentice.”

A new season of the show is tentatively scheduled for next year on NBC -- the show’s 15th cycle. NBC has a statement about that on its press Web site, which reads: “We will re-evaluate Trump’s role as host of "Celebrity Apprentice" should it become necessary, as we are committed to this franchise.”

As usual with these statements, you have to parse and interpret them because their wording is so obtuse. My translation: NBC is putting off a decision on “The Apprentice” because it’s not exactly a front-burner TV show for the network at the moment, and a decision to go-ahead with season 15 might involve a reboot of the show with a new personality at its center who might not be Donald Trump.

Of course, the network could issue a decision on both of its Trump shows at any moment -- maybe even today -- simply because the issue of his candidacy for a nationally elected office, plus his politically incorrect statements about Mexican immigrants are issues that are not going away. The former might make NBC obligated to grant equal time for other candidates, which isn’t feasible. And the latter is something that any media company today would want to distance itself from, particularly NBC, which happens to own a Spanish-language TV company, Telemundo.

For the record, here’s the part of Trump’s speech last month in which he offended Mexicans, in context: “The U.S. has become a dumping ground for everybody else’s problems,” he said, then reacted to applause.

“But I speak to border guards and they tell us what we’re getting. And it only makes common sense. … They’re sending us not the right people. …,” Trump said.

The statements were made in the context of his promise that, if he’s elected president, he’ll be tough on immigration, order a wall built on the border with Mexico and pressure the Mexican government to do more to control the emigration of its country’s citizens north to the U.S.

The fact is, Trump’s candidacy is not compatible with his continuation as a network television personality. Even he must realize this -- that you can’t be seen cavorting on a reality TV show every week if you aspire to be president of the United States. Or, maybe in his case, you can -- and this is something he’s hell-bent on finding out for himself.

The funny thing is, Trump’s a very smart guy, so his knack for putting his foot in his mouth is puzzling. For example, it’s no crime to take a tough stance on immigrants or immigration policy, particularly in a national election in which this issue deserves to be discussed and debated. But he could have articulated his views on this subject without insulting Mexicans

Here’s another thing that might come as a surprise about Trump: In person, he’s kind of a friendly, low-key, likable guy. He is also shrewd, successful and well-educated. All things considered, he wouldn’t be a bad candidate at all if he could just learn to stop shooting from the lip.