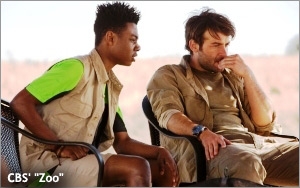 These animals are mad as hell and they’re not going to take it anymore!

That’s one theory that comes to mind when pondering the question of why some animals that have resided peacefully alongside humans in game preserves and zoos are now launching deadly attacks on people. It’s the scenario that unfolds in the premiere episode of this new summer series on CBS called “Zoo,” adapted from a James Patterson novel. It premieres Tuesday night.

The idea is implied in the first episode, which CBS provided for preview: Animals -- lions mostly -- have come to the conclusion that humans have not been responsible stewards of our planet’s natural spaces. As a result, the animals feel increasingly squeezed, and now they’re fighting back for their very survival, if not revenge.

In “Zoo,” the action takes place in two disparate locations, a wildlife park in Africa and a city zoo in L.A. In the African park, lions are grouping together and attacking tour groups and tourist encampments. In L.A., predators have escaped from the zoo and are hunting victims in the alleys and backstreets. And it’s not only lions; the premiere episode concludes with the suggestion of a threat from another species too.

The star of “Zoo” is James Wolk, whose career was greatly boosted by a role in “Mad Men,” in which he played adman Bob Benson. In “Zoo,” he’s a tour guide in the wildlife park where some of the first attacks occur. And he’s the son of a late naturalist who was ostracized by the scientific community for his theories, which predicted the very calamity of animal revenge that appears to be starting up in the first episode of “Zoo.”

The star of the L.A. portions is Kristen Connolly, who plays a young reporter on an L.A. paper who is so zealous and charmless in the pursuit of her profession that she rubs everyone the wrong way.

In its first installment, “Zoo” starts out slowly, most likely because the principal characters are just beginning to figure out that something has gone wrong in the animal kingdom, but they don’t know yet what it is. One main character will even be attacked, his fate unknown.

As the first episode ends, key questions loom: Will even more animal species join the fight? Will there be incidents of gorilla warfare? Will hungry, hungry hippos develop an appetite for human flesh?

Recent stories in the news form a coincidental backdrop to this series. One was the mass escape of wild animals (lions and tigers and bears, and also hippos) from a zoo in the former Soviet state of Georgia during a catastrophic flood earlier this month. There were human fatalities, but these were caused by the flooding, not the animals -- which didn’t seem to take up the opportunity presented by their newfound freedom to attack the human race.

However, in the other story earlier this month, a woman at a wildlife park in South Africa was fatally slashed through her open car window by a lion (specifically the lion’s paw).

That was a real-life tragedy. This TV show, however, is a piece of summer escapism on network TV – despite the deadly scenario is depicts. The premiere episode is mindlessly entertaining, just enough to keep you interested for the hour, but not sure if you’ll tune in next week to see what happens when even more animals attack (presumably).

That will depend on whatever else is on. I suspect that the fortunes of “Zoo” will rise or fall according to the quality of the attacks and how they’re rendered on the TV show. Marauding lions are one thing, but if even more docile animals begin to attack -- giraffes, for example -- then you’ll really have a summer TV series worth watching.