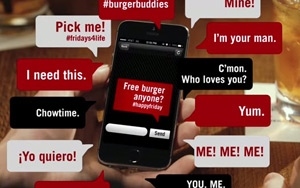 TGI Fridays is offering consumers who buy a burger the ability to share a free burger with a friend via social media.

Customers who buy a burger can enter a code on the receipt at www.jumpburger.com, and share the free burger offer via their social networks or by email. The first friend to click on the link can use the code to get a free burger at any Fridays restaurant.

The promotion, which launched July 1, will run through August.

The burger BOGO is designed to draw Millennials into the chain, which saw its U.S. sales decline 1.5% in 2014, according to Technomic.

Getting Millennials to act requires "something worthy of a conversation,” Fridays CEO Nick Shepherd noted to Bloomberg Business. “You have to go beyond relevant and become compelling.”

"We think giving our guests an innovative way to pay a burger forward, and the race to snag one of our digital burgers, allows friends to socialize in a new way, while being generous," said Fridays CMO Brian Gies, in announcing the promotion.

Shepherd said that Fridays is hoping to replicate the social media success it saw when it started offering unlimited appetizers for $10 last July: In two months, the buzz generated increased Millennials from 20% to 32% of the chain's guests.

In fact, in addition to the "Jump Burger" promotion, Fridays is bringing back the Endless Appetizers deal, and adding a couple of new options, Sriracha Chicken Potato Skins and Spicy Chicken Tostadas.

To promote the return of the appetizers deal, the chain has created its first video series, with live actors portraying various appetizers. In the first spot, a stuffed potato skin urges his fellow appetizers to fight back by unionizing.

The campaign, from the Made agency, also includes TV spots, digital ads and social media.