Hispanics over-index in [insert every product and service here]. Every day we find out how Hispanics over-index in everything from mobile coupons to hamburgers. While interesting data, it doesn’t really provide marketers with the insight needed to effectively target Hispanic consumers. We are guilty of contributing to the over-indexing story because as a market-researcher, we are tasked with reporting the numbers. The over-indexing narrative is becoming so pervasive that we are running the risk of over saturating the marketing conversation to the point where our over-index chant becomes a drawn out hum, tuned out by the brand managers and consumer insights professionals that need to hear us most. But ultimately, the reason this narrative is so pervasive is because, well, Hispanics do over-index across many categories in comparison to their general market counterparts.

In an attempt to steer the conversation to a more useful place, this is the first of a multi-part series that will attempt to look into several categories where Hispanics over-index and try to move beyond the numbers to see what is driving this difference.

The first part of beyond over-indexing will focus on binge-viewing. We conducted the first multicultural study on binge-viewing (defined as watching 3 or more episodes of the same series in one sitting) this year that looked at binge viewing habits of Hispanics vs. non-Hispanics.

So let’s get the over-indexing out of the way first:

Respondents were asked the following question: “When thinking of your favorite television series – do you prefer to watch several episodes back-to-back or space them out over time? 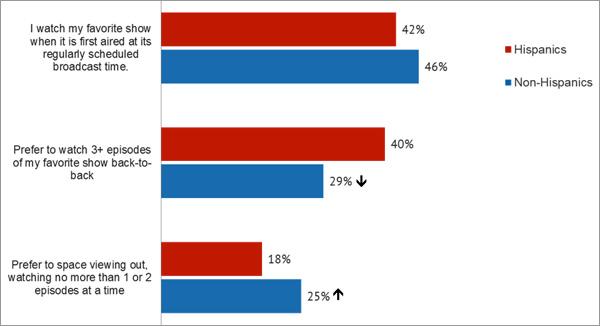 The research shows how Hispanics are significantly more likely to watch 3+ episodes of their favorite show back-to-back. Oka, so that is out of the way, now what does that mean?

Well, as we delve further into the data we see that younger Hispanics are driving this binge-viewing trend: 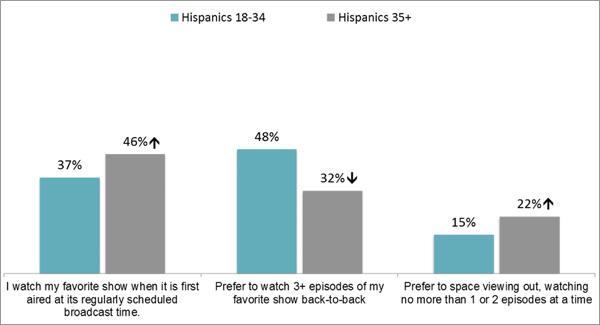 Makes more sense, but still a “duh” for most marketers, millennials are more likely to binge-view than their older counterparts.

What’s missing in the above, though, is a generally known fact for those in the Hispanic marketing business but not necessarily for all marketers: Hispanics as a population are significantly younger than their general market counterparts. The median age for Hispanics is 27 years while the median age for the U.S. population is 37 years, according to tabulations of the Census Bureau's 2010 American Community Survey. Hispanics as a population are in their prime binge-viewing years.

So what does this mean for online streaming content providers? A large percentage of their core-users are Hispanic and Hispanics have different consumption patterns than their general market counterparts. According to our research, Netflix is the leader among U.S. Hispanic binge viewers and is continuing to take steps to cement that position by increasing their Spanish-language content. Netflix has gone even further to capture Hispanic audiences by integrating a nod to Latino diversity in its hit series, "Orange Is The New Black," through a central story line in its latest season.

Newcomer to the streaming content provider, YipTV, is doubling down on Hispanic audiences, providing live streaming of Spanish shows and sports from Latin America.

Streaming content will be reaching a tipping point soon and a key differentiator of success for existing and incoming companies could be their Hispanic strategy. Hispanics are in their binge-viewing prime years and that cohort is only going to continue to grow. Streaming content providers will have to not only look at their Spanish-language content, but also look to integrate Hispanic culture in their original content that will attract Hispanic viewers while not alienating general market subscribers. It seems like a daunting task but we are already seeing companies head towards strategies that effectively integrate both strategies.

Stay tuned for the next part of Beyond Over-Indexing. I am going to go watch all seven seasons of “Mad Men” for inspiration now.

2 comments about "Beyond Hispanic Over-Indexing: Binge-Viewing ".
Check to receive email when comments are posted.
Read more comments >
Next story loading