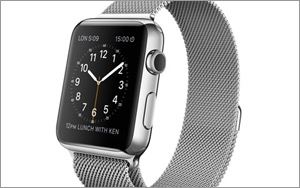 Wearable, connected-home and drone technology have caught the public’s attention, and are boosting the entire consumer electronics sector.

According to the Consumer Electronic Association’s mid-year sales and forecast report, retail revenues for the consumer electronics industry are projected to grow 2.5% in 2015 to $285 billion, led largely by growth in the aforementioned emerging product categories.

The mid-year forecast is a slight downward adjustment from the organization’s 3% growth projection from January, due to slower than expected economic growth in the first half of the year. Indeed, without the projected 101% growth (and $10 billion) from the emerging product categories, overall industry revenue would remain flat for 2015.

“They are making their presence known,” Chris Ely, senior manager for industry analysis at the CEA, tells Marketing Daily. “If those products did not exist, the industry would be flat. Moving into 2016, they’re forecast to produce $15 billion in revenue.”

Topping the emerging technology category are health and fitness trackers, which the CEA projects will lead all wearables in 2015, selling more than 20 million units (a 21% increase over last year) and revenue of $1.8 billion. Meanwhile, connected home technologies (such as smart thermostats, smoke detectors and Internet-connected security systems) will jump 32% over last year, reaching nearly $1 billion in revenue in 2015. The year could also be a defining one for drones, with revenue expected to reach $105 million, up 52% from 2014.

In addition to the wearables, connected-home and drone technology, products in the emerging technology category include 3D printers and 4K ultra-high definition television sets. The latter are catching on well, with unit shipments expected to reach 4.4 million (a 205% increase) in 2015 and revenue of $5.3 billion.

Though the overall industry will be boosted by the emerging sectors, more familiar technology will continue to lead the industry. Smartphones, tablets, LCD TVs, laptops and desktop computers will contribute more than half of the industry’s overall revenues. Smartphones remain the sales leader, generating $54 billion in revenues, up 10% from last year. However, as less expensive models enter the market, and consumers see less need to replace them as often, smartphone sales will begin to slow over the coming years, Ely says.

“Many consumers are starting to realize [the practice of having] subsidies, but locking into a two-year contract may mean them paying more over the life of the contract,” Ely says. “They may not feel as compelled to upgrade.”

Tablet sales, meanwhile, will decrease about 5% as the market reaches saturation and maturity, consumers adopt larger-screen smartphones and replacement cycles lengthen. Though a decline of 7%, tablet sales revenues are expected to reach $23 billion in 2015.

Laptop, notebook and netbook sales, however, are expected to increase 9% (with revenue of almost $18 billion), as consumers continue to use them for computing tasks. “We never saw evidence [in our previous research] of consumers getting rid of their laptops for tablets,” Ely says. “And now we’re seeing when it comes to computing — word processing, spreadsheets — that’s when laptops are preferred.”