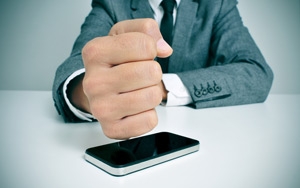 The Federal Communications Commission's new text-spam rules are already playing a role in a lawsuit brought by Philadelphia resident Bill Dominguez, who says Yahoo sent him more than 27,000 unwanted SMS messages after he obtained a used phone.

The FCC's new rules, released on Friday, provide that companies can only autodial or text a reassigned number on one occasion before potentially violating the Telephone Consumer Protection Act. That law prohibits companies from using autodialers to send SMS messages without the recipients' consent.

The rules also define autodialers as equipment that's capable of generating random phone numbers -- even if, as apparently happened in Dominguez's situation, the system actually sends messages to a non-random list of numbers.

When the FCC issued the rules Wheeler appeared to mention Dominguez's experience, though without using his name.

“If you have the bad luck of inheriting a wireless number from someone who wanted all types of robocalls, we have your back,” Wheeler said in a statement issued on Friday. “We make it clear first that callers have a number of tools to detect that the number has changed hands and that they should not robocall you, and we provide the caller one single chance to get it wrong before they must get it right. ... One consumer received 27,809 unsolicited text messages over 17 months to one reassigned number, despite their requests to stop the texts.”

Dominguez's attorney this week called attention to those statements in a new court filing.

“To the extent that there was any uncertainty about the FCC's Declaratory Ruling, the statement of Chairman Wheeler eradicates it,” lawyer James Francis writes in a letter to the 3rd Circuit Court of Appeals. “The Chairman specifically referenced Mr. Dominguez's plight, and indicated that the Ruling was designed in part to address/prevent his particular dilemma.”

Dominguez sued Yahoo in 2013 for allegedly violating the Telephone Consumer Protection Act. U.S. District Court Judge Michael Baylson in the Eastern District of Pennsylvania ruled in Yahoo's favor in March, when he granted the company summary judgment on the grounds that Yahoo's system isn't an automated dialer.

Dominguez appealed that ruling to the 3rd Circuit, which is still considering the case.