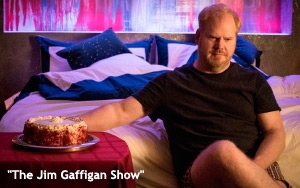 The biggest mystery concerning Jim Gaffigan is how he can afford to live in Manhattan with a family of seven.

The answer must be that the comedy business must be paying extremely well for Gaffigan these days. Either that or the members of his large family have found a way to live more or less normally in a very cramped space.

That happens to be the way the fictional (or semi-fictional) Gaffigans are living, in a small apartment, in his new TV Land sitcom, which is adapted from his real life. It’s the kind of adaptation that feels like it’s sort of true, but isn’t really, although you have no idea what’s true and what isn’t.

It is true that Gaffigan, 49, does have five children and lives in Manhattan. His wife, Jeannie, is a co-executive producer of his new show, although she doesn’t appear in it. In the show, she’s played by actress Ashley Williams.

In last week’s premiere episode of the show --  titled “The Jim Gaffigan Show” -- Gaffigan and his TV family were seen attending Sunday mass at St. Patrick’s Old Cathedral downtown. And I recently saw a photo of Gaffigan and his real-life family coming out of the same church, so they likely live in the area, which happens to be expensive. (Sorry to be so fixated on this, but as a New York City resident, I’m obsessed with real estate -- as is almost everyone else who lives here.)

I saw him once walking around down there with one of his small children and I said something like, “Hey, Jim Gaffigan, good to see you!” and he scowled and/or grunted back at me. Apparently, he didn’t feel the same way about seeing me.

Oh, well. Fortunately, he’s a lot more affable on his TV show, which positions him as a befuddled dad amidst this active brood -- not exactly the newest idea for a comedy about family life on TV. In fact, it’s one of the oldest, but Gaffigan makes it work for no other reason than the fact that he has emerged as somewhat of a grand master in the art of mild-mannered befuddlement.

In the publicity leading up to his show’s premiere, much was said about Gaffigan’s stand-up act, in which he goes against the grain and “works clean” (or relatively clean), as opposed to most other comics today who traffic in more adult material.

On the premiere episode of “The Jim Gaffigan Show,” for example, references to sex had to do with the possibility of producing more children, which the TV Gaffigan was thinking of preventing by undergoing a vasectomy.

So the episode’s plot had to do with whether or not squeamish Jim would go through with it. His TV wife was certain he would never actually undergo the procedure. And guess what: She was right because in this show, as in so many others that have come before it, mother/wife knows best.

Last week’s premiere was the first of 11 episodes for the “Gaffigan” shows first season. The co-creator of the show -- with Gaffigan -- is Peter Tolan, who co-created “Rescue Me” (with Denis Leary), another show that was made in New York.

The new Gaffigan show is part of a push on TV Land’s part to take its original programming up a notch or two. The show is a step in the right direction.