Not Again! Plumbing The Many Mysteries Of 'Sharknado 3' 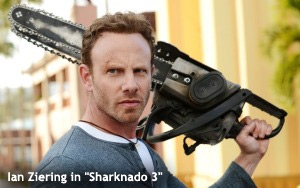 Many questions arise while watching “Sharknado 3,” the third installment of the Syfy channel’s “Sharknado” movie series.

This new one -- subtitled “Oh Hell No!” (which happened to be my reaction when I first heard Syfy was producing it) -- premieres Wednesday night.

For example, you might wonder: How do so many of the sharks remain alive after being out of the water for so long? Don’t they suffocate or something?

Or what about this: Even if you accept the fact that a super tornado can throw a shark with incredible force, thus turning it into a deadly projectile, is such force really strong enough for the thrown sharks to penetrate concrete walls and topple buildings and structures such as the Washington Monument and the White House (both of which get destroyed in “Sharknado 3”)?

Even more mysterious: What possessed NBC News personalities such as Matt Lauer, Savannah Guthrie, Natalie Morales and Al Roker to agree to appear in such a stupid TV movie? When you see them in this new “Sharknado” movie, you actually wonder if there’s someone off-camera, perhaps some corporate drone from NBC Universal (owner of the Syfy channel), holding a gun on them. There’s no other way to explain why newspeople -- you know, the people who are supposed to represent the “serious” part of the company, the news division -- would say yes to appearing in a “Sharknado” movie.

I know that some readers will accuse me of being a fuddy-duddy with this opinion, that there’s no harm in newspeople having a little fun this way. But Brian Williams was only having a little fun when he told tall tales about himself on the “Letterman” show, and look what happened. I’m just saying.

Meanwhile, a lot of other people not affiliated with NBC News probably had a lot of fun making this new “Sharknado” movie. Unless you’ve been living under a rock, you are likely aware that the first “Sharknado” movie came out of nowhere in July 2013 to become the surprise hit of the summer, aided by social media and the fact that nothing else was apparently on TV that evening.

Two summers later, we’re on to the third one of these movies in which a series of super tornados forming over the oceans are so powerful that they propel schools of man-eating sharks into the air and then deposit them smack in the middle of major U.S. cities where they devour every human they encounter (before the sharks become unable to breathe and then die, presumably).

In the first two movies, Los Angeles and New York were thus affected. In this new movie, Washington, D.C., is the target of a new super tornado which eventually joins with other such super funnels to form a mega-tornado wall that one character -- a weather geek and airborne-shark warrior played by Frankie Muniz -- characterizes as a full-blown sharkicane.

“I could be wrong,” concedes the Muniz character, who then makes up another word: “Bio-meteorology isn’t really an exact science yet!” The Muniz character is so heroic that Muniz himself should earn an EmCademy Award (that’s a combo Emmy and Oscar) for his performance in “Sharknado 3,” which stars Ian Ziering and Tara Reid, the two principal has-beens whose careers have been saved (or at least unnaturally prolonged) by these “Sharknado” movies.

Joining them in this “Sharknado”-fest are such luminaries as Bo Derek, David Hasselhoff and Penn and Teller. Mark Cuban and Ann Coulter play the president and vice president, respectively, of the United States. The long list of cameo appearances includes Jerry Springer and author Jackie Collins.

In “Sharknado 3,” the entire Eastern Seaboard from Washington to Orlando, Fla. (what Al Roker dubs “the feast coast”) is under attack by airborne sharks. But most of the action takes place at Universal Studios in Orlando, the amusement empire owned by NBC Universal. Not only does the amusement park and its various rides get nearly two hours of exposure in the movie, but so does Comcast’s Xfinity brand (seen several times -- on a prominent sign and on a race car) and the Cabana Bay Beach Resort, a property owned by NBC Universal that is attached to the theme park.

Also prominent in the movie: A giant billboard, seemingly in the middle of Washington (where there wouldn’t possibly be such a billboard), that says “Subway: Eat Fresh,” no doubt another clever image-placement on the part of Subway. Perhaps this was the scene where Subway spokesman Jared Fogle reportedly had a cameo before he was recently excised from it.

Please note that this “Sharknado” movie suffers no reduction in quality due to his absence.