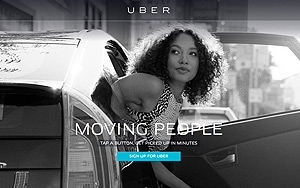 In a defeat for Uber, a federal judge ruled that the car service company potentially violated a text-spam law by sending unwanted messages to prospective drivers who submitted their cell phone numbers as part of an abandoned job application.

"If the plaintiffs never completed the application process, it is not clear that they intended to “make available” their personal information, including their phone number, to Uber," Tigar wrote in a ruling denying Uber's motion to dismiss the lawsuit.

The ruling enables the consumers to continue with their potential class-action against Uber, but doesn't mean that the company ultimately will lose the case.

The decision stems from a lawsuit filed late last year, alleging that Uber violated the Telephone Consumer Protection Act. That law prohibits companies from using automated dialers to send SMS messages without the recipients' express consent. If the messages are considered "ads," recipients must consent in writing.

Tigar said in his ruling that the recruiting messages allegedly sent by Uber weren't "ads," meaning that Uber didn't need recipients' written permission, provided the company had another form of explicit consent. He went on to rule that submitting a phone number as part of a half-finished job application doesn't constitute explicit consent.

The group that sued included one person (Kerry Reardon) who completed a job application with Uber, and four others (James Lathrop, Jonathan Grindell, Jennifer Reilly, and Justin Bartolet) who started to apply through Uber's site, but didn't finish the application.

Uber argued that all five of the applicants consented to receive SMS messages by providing their phone numbers. Tigar agreed that Reardon clearly gave Uber his phone number and dismissed his claims. But the judge said that the others didn't unequivocally provide Uber with their phone numbers.

Tigar explained his reasoning by discussing a scenario in which a job applicant appears at a business in person, fills out an application on paper, but then decides not to apply for the job.

"She does not complete her application or turn it in, and instead, throws it away when she gets home. Has she 'provided' her mobile phone number to the business, just because an employee of the business looked over her shoulder while she was writing?" Tigar writes. "The court would find it difficult to hold that she has done so as a matter of law."

He also noted in the ruling that three of the cell phone users say they asked Uber to stop sending them messages. Those allegations provide an "additional ground" to allow the lawsuit to proceed, he ruled.