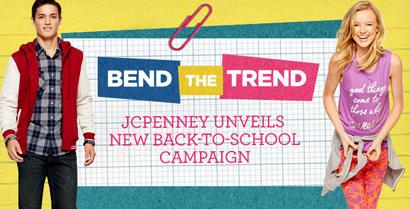 JCPenney is hoping to win over the back-to-school crowd by appealing to kids’ love of fashion mash-ups: Its new “Bend the Trend” campaign targets a growing interest in personalized style.

The Plano, Tex.-based retailer, still in the midst of its turnaround plan, says the TV campaign is scheduled to break later this month. And while a spokesperson says it’s not yet sharing the spots, created by Doner, they’ll focus on how easy it is to combine different trends for personalized style. A “Skater-iffic” look might pair a girly skater skirt with a metallic tee, while “Sophisti-Casual” might combine a faux fur vest with new high-top sneaks. In-store displays also play off unusual combos, with names like “Gym-Tastic,” “Plaid-Posterous” and “Varsity-Hues.”

And to add to its credibility in the cool-looks-for-every-kid department, it says it has already added a Juniors Plus collection in 200 stores, designed for curvier teens, and that it expects the collection to be in 400 stores this fall.

Besides TV and video, print ads are running in Seventeen, and the campaign also includes direct mail, preprints, and broadcast.

And to get its message spreading in social channels, the retailer is declaring Aug. 12 “National Shout-Out Day.” It hopes it can encourage kids and teens to post online compliments to friends, parents and neighbors, using the #ShoutOutDay hashtag. Besides giving its own shout-outs to anyone talking about personal style, it’s also offering digital compliment cards on its Tumblr page, so that teens can flatter friends who post pictures of themselves in back-to-school gear.

The company says it is also sponsoring AwesomenessTV, an online video series on YouTube that relies on such teen influencers as Josh Tryhane, Sierra Marie, Paulina Cerrilla and the Merrell Twins. Video stars will wear JCPenney fashion-mashed looks while hyping the shout-out celebration.

While the company still has a ways to go before regaining its former status, it posted promising results back in May, its most recently quarterly report, with same-store sales rising 3.4%. And for the full year, it’s now expecting same-store sales gains of between 4 and 5%.