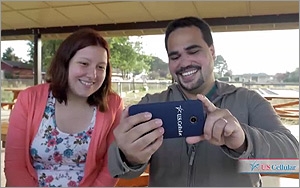 There’s a common misperception that the smaller, so-called regional carriers don’t provide the same network coverage across the country as the national brands. U.S. Cellular is looking to change all that.

Teaming with chef, food writer and television personality Andrew Zimmern, the regional telecom has created a five-part series, “Big Country,” that takes five of its customers (who have either never traveled or only traveled a little) to places they have always wanted to visit (like New York City; Portland, Maine; and San Francisco).

“As a regional carrier, what’s important for us is [to communicate] that we have national coverage,” Grant Leech, vice president of brand management at U.S. Cellular, tells Marketing Daily. “We saw this as a way to use travel as a way to reward our customers and show that.”

In each of the episodes (which will be shown on Scripps Network properties The Travel Channel and the Food Network), Zimmern takes the traveler to notable spots and on exclusive experiences in each destination, all while using U.S. Cellular’s network to share the happenings with loved ones. In the first episode, which premiered last week, Zimmern takes a man from McKinleyville, California (who has never left the state) on a trip to New York City, where he heads to one of the city’s oldest restaurants for a hamburger, takes a helicopter tour of the city and stands in the middle of Times Square. Throughout the trip, he shares photos with his wife (who nominated him for the trip) and on social networks. He also makes an emotional call to his father expressing how his longtime dream trip came true.

“We were looking for people who have rarely traveled or this might be their first time traveling, people who wanted to to go somewhere and do something different in a different part of the country,” Leech says.

In addition to running on U.S. Cellular’s Web site, FoodNetwork.com, Travel channel.com, and ULive.com, edited versions of the episodes will run on Food Network and Travel Channel in full commercial breaks in between programming. The plan creates an opportunity to get around DVRs and ad skippers, Leech says.

“Because you’re seeing a personality you’re familiar with, it feels like it’s part of the ‘network’ programming,” he says. “This allows us to use the capabilities of the Travel Channel and Food Network to reach our audience.”