The Feuds! The Firings! Trump's History Of Hilarity On TV 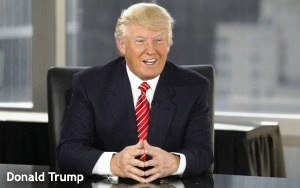 You can predict a lot about a Donald Trump presidency by examining his personal TV history.

For openers, you can likely expect feuds, feuds and more feuds as President Trump reacts to slights both large and small and then tweets, “[So-and-so] sucks!” Or “[So-and-so] is a loser!” Or [“So-and-so] is bad!”

On the other hand, Trump might turn into the most accessible president in U.S. history, at least where TV talk shows are concerned. If his personal TV history is any guide, he’ll make saying yes to talk-show invitations a hallmark of his presidency, appearing mornings, middays and late at night to make his case for immigration reform, healthcare reform and birth-certificate reform.

And he might even transform the White House into the scene of the most uproarious competition-reality series of all time as celebrities undertake nutty tasks in a quest for cabinet positions and ambassadorships.

Can’t you just picture it? “Dennis Rodman – you’re fired!” declares Trump, President of the United States and Decider-in-Chief on “Celebrity Cabinet Secretary,” as he eliminates the former Chicago Bulls rebounding star as a prospective U.S. ambassador to North Korea.

It’s a timely moment to undertake a dissection and analysis of Trump’s history in the television arena because he is about to write a new chapter in his personal TV saga when he takes center stage Thursday night as the star and GOP frontrunner in Fox News Channel’s prime-time Republican debate (starting at 9 Eastern).

Trump’s TV history is voluminous and wide-ranging. For example, who can forget the feud Trump ignited in 2013 with HBO talk-show star Bill Maher after Maher went on “The Tonight Show” and told Jay Leno he thought Trump looked like an orangutan because of Trump’s famously orange hair?

This feud was fought on talk shows and Twitter for months before it subsided. It even snared Leno at one point, as Trump went after Jay for “allowing” Maher to make his orangutan remark in the first place. “He’s not a loyal person,” Trump wrote of Leno. “[And] I now understand why everybody dumped him. Jay sucks!” tweeted the man who now seeks the presidency.

Who else felt the sting of Donald Trump’s wrath? Well, Jerry Seinfeld, for one. In 2011, Seinfeld withdrew from a scheduled appearance at a benefit organized by one of Trump’s sons for St. Jude’s Children’s Hospital in Memphis. The reason: Seinfeld became uncomfortable with the whole Trump family because Donald was then in the midst of his infamous campaign in which he questioned President Obama’s birth origins. The Donald went public with his displeasure with Seinfeld by providing the New York Post with a letter he supposedly sent to the comedian.

“I just learned you canceled a show for my son’s charity because of the fact that I am being very aggressive with respect to President Obama, who is doing an absolutely terrible job as our leader,” said Trump in this letter. He then took aim at Seinfeld’s then-current show on NBC, “The Marriage Ref,” on which Trump had recently appeared. Wrote Trump: “What I do feel badly about is that I agreed to do, and did, your failed show, ‘The Marriage Ref,’ even though I thought it was absolutely terrible. Despite its poor ratings, I didn’t cancel on you like you canceled on my son and St. Jude. I only wish I did.”

Nielsen ratings are of the utmost importance to this prospective leader of the free world. It seems like it was only yesterday (well, actually it was 2004, if memory serves) that certain journalists on the TV beat could expect a morning-after phone call from “Mr. Trump” (as he likes to be addressed) ballyhooing the overnight ratings for the previous night’s episode of “The Apprentice.” In Mr. Trump’s telling, the ratings were always “amazing!” and the show “No. 1!” (whether this was, in fact, true or not).

Still, heaven help the comedian who dares cross The Donald. Just ask genial Seth Meyers. Trump didn’t like the jokes Meyers delivered at Trump’s expense at the White House Correspondents Dinner in April 2011, including this one: “Donald Trump said that he was running for president as a Republican. That’s funny, because I thought he was running as a joke!” said Meyers, referring to Trump’s “candidacy” that year in which he seemed to intend to run for president the following year (although he officially bailed out of the race a month after the Correspondents Dinner, at the NBC Upfront, no less).

How did Trump respond? In a subsequent interview with The New York Times, Trump slammed Meyers and his performance at the dinner. Meyers “has no talent,” Trump said. “He fell flat,” his delivery was “bad” and he’s “a stutterer,” Trump added.

A stutterer? That remark seemed especially insensitive. I remember wondering at the time: Hasn’t The Donald seen “The King’s Speech”?

Enjoy the debate, everybody!