GOP Debate Was Great TV; Stewart's Farewell Was A Yawner 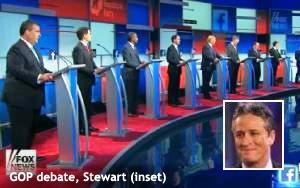 But with 10 GOP hopefuls facing off in prime time on Fox News, and then Jon Stewart hosting his final “Daily Show” immediately thereafter, it was a night to remember.

No matter how you feel about these Republican candidates or the viewpoints of Republicans in general, this was great TV -- dramatic, entertaining, even illuminating. There were clear winners and losers, some who neither lost nor won, some who left positive impressions and others who came off terribly.

Perhaps most importantly, since he received the lion’s share of attention going into this event, how did Donald Trump do? On the face of it, he fared badly. His answers to various questions seemed to support an impression already held by many that he lacks in-depth knowledge of many complex issues. His most unattractive moment -- one that was widely commented upon in the debate’s aftermath -- came when he tangled with moderator Megyn Kelly when she questioned him about comments he’s posted on social media about women. In his answer, Trump was defiant and seemed vaguely threatening.

The thing about Trump, however, is that no matter what he says, he maintains or even gains support. So it’s premature to suggest on Friday morning that Trump “lost” the debate. For all we know, his supporters probably love him even more now.

Who came off well in the debate? Chris Christie did. So did Marco Rubio and John Kasich (especially him). Wisconsin Gov. Scott Walker -- who ranked third in the popularity polls before the debate -- was unmemorable. Jeb Bush came across as competent but dull. Ted Cruz showed charisma. Rand Paul came across as angry, if not unhinged; it was a very bad showing for him. Mike Huckabee also had a bad night. Dr. Ben Carson gave the impression he is intelligent and level-headed, but he probably neither gained nor lost support as a prospective nominee (let’s face it, the odds don’t favor his nomination).

All in all, though, this was a terrific show -- an arena-sized political debate in the middle of the summer that gave millions something to talk about and share on social media. Nice work, Fox.

Meanwhile, Jon Stewart’s farewell “Daily Show” on Comedy Central played mainly to the show’s most rabid fans, those who stuck with the show over its nearly 16-year run. You had to be a “Daily Show” regular to feel the least bit thrilled by the “reunion” of “Daily Show” correspondents who appeared one by one (or in small groups of two or three) in a lengthy bit at the outset of this finale, which ran to nearly an hour in length.

Many of these correspondents became famous, of course -- including Steve Carell, Stephen Colbert, Ed Helms, Olivia Munn, Rob Riggle, Josh Gad and others. But for those who watched “The Daily Show” only intermittently over the years, this personality parade barely registered (although a cameo appearance by Stewart’s predecessor, Craig Kilborn, was a nice touch).

Then it was on to a montage of comedic farewells from other famous people -- something almost every late-night show puts together when a host leaves. These ranged from Hillary Clinton and John Kerry to Bill O’Reilly and John McCain.

Like other late-night hosts before him, Stewart paid tribute to the huge staff of “The Daily Show” who worked behind-the-scenes to produce his show. This bit was styled like the famed Copacabana scene in “Goodfellas,” when Henry Hill (Ray Liotta) takes his date, Karen (Lorraine Bracco), into the backdoor and through the kitchen of the New York nightclub as “Then He Kissed Me” by the Crystals played on the soundtrack.

“The Daily Show” used the same song and the same “single-take,” handheld camera technique to showcase every backstage staffer (including a cameo by Martin Scorsese, director of “Goodfellas”). The bit was clever at first, but then you realized you’d seen take-offs like this many times before. As the bit wore on, it just felt stale, although Stewart’s acknowledgement of his support staff was certainly appropriate and also praiseworthy.

The show ended with a performance by Bruce Springsteen and the E Street Band. When they played “Born to Run” and the small “Daily Show” stage suddenly filled up with people dancing, the spectacle played like one of those oldies shows the PBS stations air incessantly during pledge months.

Amidst the clamor, Stewart said good night for the last time. And then he was gone. The new “Daily Show” with host Trevor Noah premieres Sept. 28.