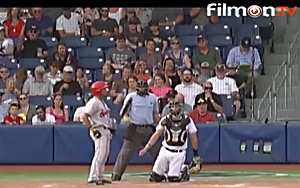 Web video distributor FilmOn X is not entitled to a license that would enable it to stream television programs online, a coalition of broadcasters argues in new court papers.

The broadcasters are asking the 9th Circuit for permission to appeal an "aberrant decision" issued last month by U.S District Court Judge George Wu in Los Angeles, who sided with FilmOn on a key issue: Wu wrote that FilmOn X is a "cable system," potentially entitled to a compulsory license.

Wu "got it wrong on the merits," the broadcasters argue. They say that only "an inherently localized transmission medium" can meet the Copyright Act's definition of a cable system.

"Internet-based retransmission services, such as defendants’, are categorically ineligible for compulsory licenses," the broadcasters contend.

Wu's ruling was seen as a surprise, largely because it's at odds with an earlier opinion issued by a federal appellate court in New York. Wu acknowledged that his decision was unprecedented, and authorized FilmOn to ask for permission to seek an immediate appeal. He also left in place an injunction that prohibits FilmOn from streaming copyrighted television programs without authorization.

The ruling stemmed from a copyright infringement lawsuit filed by broadcasters in 2012, when FilmOn rolled out a streaming system similar to one used by Aereo, the now defunct company backed by Barry Diller.

At the time, both FilmOn and Aereo said they used individual mini-antennas to capture over-the-air broadcast transmissions programs and stream them to consumers on a one-to-one basis. The companies argued that their one-to-one transmissions were "private" performances, which don't require licenses.

But the broadcasters argued that the transmissions were public performances that infringed copyright.

Last June, the Supreme Court sided with the broadcasters in a lawsuit against Aereo. The court ruled 6-3 in that case that Aereo's transmissions were public performances regardless of the company's back-end technology. The majority said in its ruling that Aereo resembled a cable system, and therefore couldn't transmit programs without a license.

The judges said that the mini-antenna technology is "invisible to subscriber and broadcaster alike," and described the platform as "for all practical purposes a traditional cable system."

Wu said that language supports FilmOn's argument. "It is ... about as close a statement directly in defendants' favor as could be made," Wu wrote.

Wu also said that he wasn't persuaded by a 2012 opinion by the 2nd Circuit Court of Appeals in New York, which ruled against ivi TV in a similar dispute. The judges in ruled that ivi TV -- which streamed television programs over the Internet -- wasn't entitled to a compulsory license.

The broadcasters argue in their latest papers, filed this week with the 9th Circuit, that FilmOn doesn't meet the technical definition of a cable system. They add that granting compulsory licenses to Web-based services "would severely constrict television broadcasters’ exclusive public-performance rights, thus rendering them less willing to develop new broadcast programming."

The 9th Circuit hasn't yet indicated whether it will hear the appeal.