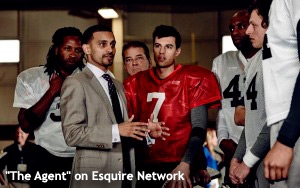 No one shouts “Show me the money!” in this new docuseries about sports agents who the Esquire Network bills as “real-life Jerry Maguires.”

Sorry, sports agents, but thanks to that 1996 movie, your fate is to be forever compared to, and lumped in with, Jerry Maguire, the driven sports agent played by Tom Cruise who did anything and everything he could to sign his clients (in particular a football star played by Cuba Gooding Jr.).

While Esquire positions this new show -- titled “The Agent” and premiering Tuesday night -- as a showcase of real Jerry Maguires, the four agents who are profiled on the show don’t really act like Jerry Maguire at all, at least not in the manic sense that Tom Cruise portrayed him.

They do log a lot of miles and expend considerable time and effort to scout and court prospective clients. In the show, these prospects are various college football players in either their junior or senior years who might potentially be picked in the upcoming NFL draft. That’s why the agents want to sign them, so they’ll be in position when the players will need them most to represent them in subsequent contract negotiations if the players should be so lucky as to have their names called.

In “The Agent,” four sports agents are profiled more or less simultaneously, although in the premiere episode Esquire Network provided for preview, none of the four cross paths. The four all concern themselves only with professional football (the community of agents involved in Major League Baseball or the NBA will have to go and get their own show). The four agents seen in “The Agent” work in different parts of the country and are seen pursuing different prospects. They’re not shown in competition with each other (at least not yet).

The four are Sunny Shah (seen in the photo, above), a brash New York-based agent who is the youngest of the group; Peter Schaffer of Denver, who says he’s been in the business for 28 years (one of his clients is Bengals star Adam “Pacman” Jones); Ed Wasielewski of Philadelphia, a licensed agent since 1993; and Jeff Guerriero, a colorful Southern trial attorney and sports agent from Monroe, La.

Their stories are told in a straight-ahead documentary style to which little or no embellishment has been added, which is one reason why this show is so attractive and worthwhile.

While big payoffs are hinted at, these agents’ lives are anything but glamorous. In fact, if the show reveals anything, it’s that these agents lead lives of everyday drudgery that are not unlike what many people in any number of other pursuits experience.

Among other things, these agents seem to do a lot of nighttime driving to far-flung small towns where they meet with their player-prospects and their families in dim living rooms not far off of highway exits. And since their quarries are really still only quasi-adults (they’re usually about 20 years old) whose attention spans are short, there’s no guarantee that these agents will ever hear from a prospect and his family ever again, even after flying and driving to these prospects’ homes on their own dimes.

While watching this first episode of “The Agent,” I wondered repeatedly how these agents ever land their clients in the first place. In their efforts to woo prospects and their families, the agents seem to lack the requisite charm and finesse necessary to close these deals.

Two of the agents in particular seem to have an aversion to using the word “please.” Instead, they bark bossy orders (“Send me a text!” or “Have him call me!”) at young prospects who they haven’t even signed yet. One agent even harangues a prospect, a star quarterback who broke his leg in two places in a game just days earlier, to start making plans for his recovery, even though the quarterback is still in great pain and has been ordered by his doctors to take it easy.

Maybe these agents are overbearing because they’re under a lot of pressure. “Eight hundred agents trying to represent 2,000 players,” notes one of them at the outset of the show. “The numbers just don’t add up.”

“The Agent” premieres on Tuesday night (Aug. 11) at 10 Eastern on Esquire Network.