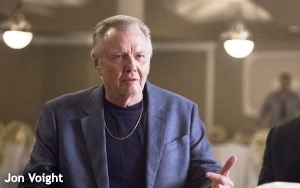 The world of “Ray Donovan” is so corrosive that I find it difficult to watch -- except for one thing: Jon Voight.

He’s giving what might be the finest performance you’ll see anywhere on TV right now in the role of Mickey Donovan, patriarch of this Showtime drama’s clan of Boston street toughs who have all relocated to Los Angeles. That’s where one of them -- the title character played by Liev Schreiber -- moved some years ago to take up work as a professional “fixer” for rich, powerful people who hire him to do their dirty work.

The world depicted in this show -- which is now in the midst of its third season -- is so doggone dirty and downright sad that watching this show sometimes makes me feel like I’m being overexposed to too much of what might be referred to as the darkest aspects of human nature.

At the same time, I realize it’s a great show produced at a very high level of quality. Maybe that’s the paradox: “Ray Donovan” is so unflinching in its depiction of its troubled characters and dark story lines (there are murders, criminals of all sorts, intimations of child molestation by priests, adultery, political corruption -- the whole nine yards), that its exceeding high quality winds up being very taxing to sit through.

As a TV columnist, I have encountered this phenomenon often in my career with shows that I make a point of following in order to get a couple of blog posts out of them. Regardless of the unpleasantness associated with watching a show like “Ray Donovan” (seriously, I sometimes feel like I have to take a shower after watching this show), I watch it anyway because that’s what the job requires me to do.

Fortunately, there’s Jon Voight, whose performance in “Ray Donovan” takes my breath away. The character of Mickey Donovan is a life-long criminal from Boston recently released from a long prison term who has also moved to L.A. to reconnect with this family. These include Ray’s teenage son and daughter who are Mickey’s grandchildren. Of course, Mickey needs to make a living, so he involves himself in various criminal activities, since these are the only pursuits he knows.

Voight’s performance is more than just acting; it’s a transformation -- one of those rare examples of an actor cloaking himself so completely in a new identity that you forget you’re watching an actor. Instead, you believe you’re watching, in this case, a career criminal named Mickey Donovan.

Voight’s achievement has little to do with makeup or costuming; it’s more an effect achieved by his absorption (and subsequent projection) of the inner life of this character. It’s something actors are trained to do. And non-actors such as myself only have a vague idea of what this “inner life” aspect of acting is really all about until you encounter an actor such as Jon Voight playing Mickey Donovan and you suddenly understand.

True to form, Voight is not nominated for an Emmy this year for “Ray Donovan” -- just another small piece of proof that the Emmy voters don’t know what they’re talking about. He was nominated for the role in the supporting actor (drama) category a year ago, and has been nominated twice before for other TV roles. He has never won.

Oh well -- “Ray Donovan” has just been renewed for a fourth season so unless Mickey Donovan gets killed off this summer, Voight will be back for another go-round next year. Maybe the Emmy’s will recognize what “Ray Donovan” fans already know -- that acting on TV doesn’t get much better than this.

The sixth episode of the current third season of “Ray Donovan” premieres Sunday (Aug. 16) at 9 p.m. Eastern on Showtime.