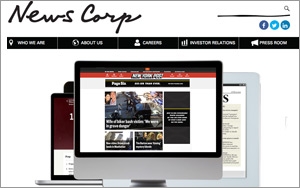 Now entering its third year as an independent company, following its spinoff from Fox in June 2013, News Corporation is still struggling with the same long-term decline in print revenues affecting other newspaper publishers.

However, the company also noted positive trends in its digital real estate and book publishing businesses.

The company’s newspaper publishing revenues fell 10% from $1.56 billion to $1.4 billion over this period, as ad revenues tumbled 13% and circ slipped 5%; when the impact of currency fluctuations are excluded, total revenues were down 2%.

The newspaper slump was partially offset by growth in other areas, with bright spots including digital real estate revenue, which jumped 67% to $190 million, powered by the acquisition of Move. Book publishing revenues were also up 8% to $390 million, due principally to the acquisition of Harlequin.

Move’s traffic in the second quarter increased 42% year-over-year to around 45 million, powered by an 80% increase in mobile users.